Tony Parker is sporting some cuts after he was caught in the crossfire of the Drake and Chris Brown fight earlier this week. Find out what he has to say about the injuries. 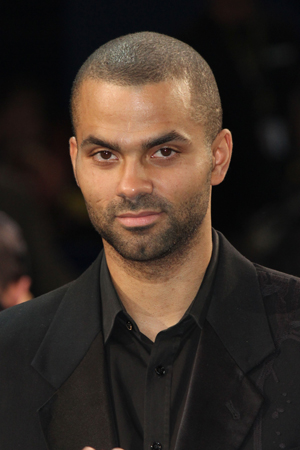 Okay, this whole fight between Drake and Chris Brown is getting stranger by the minute. It was bad enough that random W.i.P. clubgoers were caught in the crossfire, but now it turns out that San Antonio Spurs player Tony Parker was thrown into the middle of the fight — and his eye is cut!

“I was there with a bunch of friends when a fight broke out. They started to throw bottles about… I got it all,” he told Yahoo! Sports on Thursday afternoon. The ex-husband of Eva Longoria was sporting some sunglasses indoors to mask the injury. “The cornea has been touched. I can’t do anything for seven days… But I was lucky. The injury won’t prevent me from competing the Olympics in any way”

It sounds like he got it worse than Chris Brown — the singer only got a gash on his chin during the 4 a.m. fight. The actual details of the fight are sketchy, but it’s clear that someone approached Brown’s table to ask if he had a problem with Drake, according to the Associated Press.

It’s widely rumored that Brown sent a bottle of champagne to Drake’s table to “bury the hatchet” on their feud over Rihanna, but Drake allegedly sent the bottle back with a note that said “I’m f*****g the love of your life (Rihanna), deal with it.”

However, Drake’s rep said nothing like that happened and he was actually leaving the club when the fight went down.

“He did not engage in any activity which resulted in injury to person or damage to property,” the Canadian rapper’s rep said. Instead, many are saying rapper — and Drake pal — Meek Mill is responsible for starting the fight.

As for Rihanna? She hasn’t commented publicly on the fight, but sources say she loves the drama.

Rihanna “loves this!” a source told US Weekly. “Men fighting over her? Are you kidding? Of course. [She] loves the drama.”

The source added that the sexy singer “got text messages from everybody telling her what happened right after it went down. She just laughed. She’s spoken to both of them and just thinks it’s crazy. She’s glad she wasn’t there though!”

Uh, we love drama as much as the next person, but we really hope she doesn’t encourage person-on-person violence — we all know her history with that and it’s never cool, whether it’s between two lovers or enemies.