Jimmy Kimmel couldn’t show the promotional images from Octomom Nadya Suleman’s upcoming adult film to his studio audience. So he did the next best thing by taking them to the streets and showing them to innocent bystanders. The results are priceless. 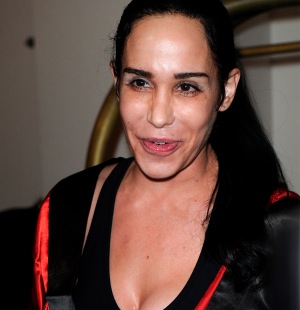 In an inspired bit, Kimmel took the images — which he admitted he couldn’t show on network television — and showed them to unsuspecting citizens trying to walk around the street of Los Angeles, then recorded their horrified reactions.

It’s rarely a good sign when someone looking at a photo of you has to ask, “Is that her stomach?”

Others merely felt their own stomachs churn, as when one lady bravely admits, “I’m about to throw up in my mouth.”

Our favorite comment from someone flipping through the photos, though, has to be when a lady asked, “Is that a man or a woman?”

The reaction-shot video’s pretty fantastic. It’s a lot more enjoyable to look at than the promotional images from Octomom’s adult film. By any chance, will you be renting this fine piece of art when it’s available? Suleman seems pretty excited by it, telling the Huffington Post, “I owe a lot to Wicked Pictures contract star Jessica Drake; she opened my eyes to a whole different world of self-pleasure that I could have never imagined. They made me look so glamorous and for the first time in my life, I felt beautiful and sexy. I’m very excited for it to come out!”