Aretha Franklin’s firing back at reports that she left Thursday’s fundraising dinner for President Barack Obama early. Saying TMZ “never has the facts right,” the Queen of Soul updates the evening’s schedule and even tells us what food they served. 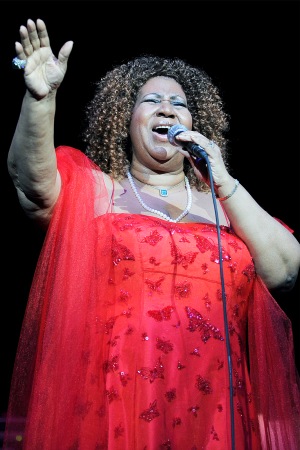 Did Aretha Franklin show President Barack Obama some R-E-S-P-E-C-T by sticking around his Manhattan fundraiser on Thursday evening? Or did the Queen of Soul eyeball the exit after 20 minutes, as was previously reported by TMZ?

Calling it “The $40,000 Eat-And-Run,” TMZ claims Franklin bolted the dinner held at actress Sarah Jessica Parker’s New York City abode, saying Franklin was “the first to arrive … [but] also the first to leave.”

Normally, few would care about the comings and goings of the rich and famous at an upscale political brouhaha. But Franklin received such criticism for allegedly dissing President Obama that the singer finally shot back.

“I arrived at 5 o’clock and I did not leave the fundraiser until around 7:15,” Franklin told the political Web site Politico, saying that TMZ “never has the facts right” and that she “had a wonderful time” but had “a second appointment at the Songwriters Hall of Fame.”

Not that there weren’t plenty of other A-list celebrities in attendance at the event. Oscar winner Meryl Streep, Vogue editor Anna Wintour and Parker joined Barack and First Lady Michelle Obama at the event, which cost attendees $40,000 a plate.

The uproar over Franklin’s departure from Obama’s event seems silly, in hindsight. As most of you likely remember, the singer was hand-picked by the President to sing at his inauguration ceremony in 2009.

As for the dinner, even if Franklin only stayed for a few minutes, she lingered long enough to know what they served, telling TMZ, “They had something very gourmet — it was a chicken that had different accents of color, tomato and something that looked like a mustard sauce under the chicken. I didn’t get a chance to taste it.”

Probably because she left so early.