The rumor mill was working overtime speculating that Kourtney Kardashian already gave birth to her daughter. It’s just not true, though — not yet, at least. 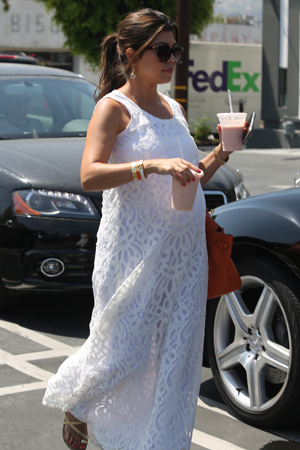 Kourtney Kardashian is about to be a mother times two, it just hasn’t happened yet. The pregnant reality star set off a firestorm of speculation when she tweeted about her plans for Thursday night.

“Chick-fil-A and a water birth,” she tweeted. “No big deal.”

Turns out she did watch a water birth — it just wasn’t her own.

“Witnessed a water birth last night with @KhloeKardashian. What an experience! All I can say is WOW!” the oldest Kardashian sister tweeted a few hours later without acknowledging the controversy she created — have to keep people talking, after all!

That’s not to say she won’t be popping soon — the mom of Mason is set to give birth sometime in July. We have to wonder if this will finally calm the hard-partying ways of her dapper baby daddy, Scott Disick. It seems like his constant nights out are still a pain in Kardashian’s side and her anger is the core subject of this week’s Keeping Up With the Kardashians.

“You wouldn’t answer my texts, but you were sending me pictures of you guys,” she fumed to Disick, referring to his nights out with sister Kim Kardashian.

“Well, that’s an answer,” Disick replied. “Isn’t a picture worth a thousand words?”

“I’m not into staying home by myself every night while you guys are partying it up. I wake up in the middle of the night seeing if [you’re] home — it’s disrupting my sleep,” Kardashian shot back.

She then laid the smackdown on her sister about keeping her fiance out at night.

“You can find your own boyfriend to hang out with because mine is going to be at home with his pregnant girlfriend and son,” she snapped.

Pregnancy hormones alert! She’s right, though we don’t understand why she keeps putting up with his crap. We have yet to find one redeeming quality in him.