Tom Cruise was the honoree at Tuesday night’s Friars Club affair, but where was the roast? The man of the hour accepted his Entertainment Icon Award blissfully unscathed. No fun! 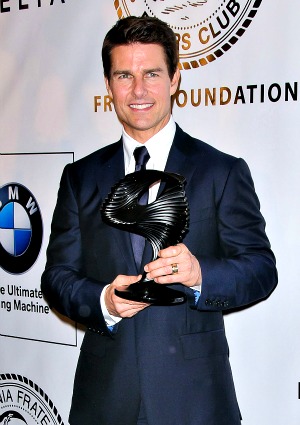 Tom Cruise is open to accepting some Friars Club love, but hold the jokes. The actor was honored Tuesday night, receiving the Entertainment Icon Award, but did not take part in one of the club’s beloved comedic roasts.

“My wife couldn’t be here tonight,” Tom Cruise, who took 6-year-old daughter Suri and son Connor as his dates, told the crowd gathered in his honor. “I have to thank her — she made this suit for me. She couldn’t be here. She’s in China, actually, working. And my oldest daughter, Bella, who couldn’t be here, she’s also working — the women are all working in my life,” he quipped.

The Entertainment Icon Award is quite an honor for Tom Cruise, who is only the fourth person to receive it in the 108-year history of the Friars Club.

The tribute evening, a departure from traditional comedic roasts, included speeches given by both current and former co-stars — who mostly resisted the temptation to throw a jab Tom Cruise’s way.

“Here’s what Tom Cruise taught me: When you feel stressed, when you feel overwhelmed, when you are multitasking on a level you might not be capable of, pause and hum the tune to Mission Impossible. I swear to god, it focuses you. [Hums M.I. theme.] Coffee down. Hang up the phone. Pick up the dry cleaning. [Humming.] Head to the elevator. Put the dog in, drop off the dry cleaning, call Mr. Important back on the phone. Your wife’s out of the shower, the clothes are there. [Humming.] Back downstairs, coffee, close the deal, wife’s dressed, you’re a hero. It works every time.”

Meanwhile Cuba Gooding Jr., former Jerry McGuire co-star dished this light jab: “I have to say this: Conno — and he’s going to be mad at me — but I’m your real daddy.”

“For me and my relationship with Tom, I think it’s much more about a toast than a roast, for sure. He affected my life in a most profound way as an artist, so I really can’t say anything bad about him. It was my first feature, and it was quite a journey. It was so great.”

Seeing as how young Suri Cruise was in attendance at the event perhaps it’s best the 49-year-old didn’t receive the roast treatment Tuesday night — but we’d love to see it happen someday soon!

Do you think Tom Cruise would ever agree to a Friars Club roast?