The NBA has been accused of being rigged for far longer than the Miss USA pageant has been battling such accusations. But David Stern couldn’t take the heat from Jim Rome’s questions about such “rigging” and, instead of getting out of the kitchen, the NBA Commissioner shot back at the host on one of his shows: “Have you stopped beating your wife yet?” 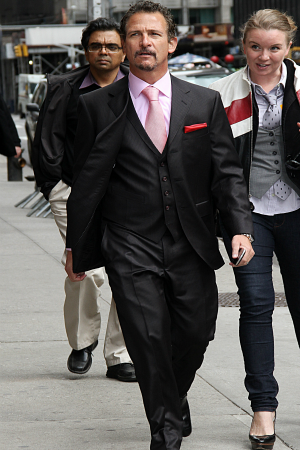 Let’s just make this clear: For those of you who don’t know the longtime sports personality, there is no evidence — or even rumors — that Jim Rome actually beat his wife. Ever.

So why did the often-surly NBA Commissioner David Stern confront Rome during a live broadcast in such an inflammatory way?

Well, it all started when the TV and radio host pressed Stern Wednesday on the rampant conspiracies related to the organization’s alleged draft lottery “fixing.”

Stern first pooh-poohed the suggestion, saying, “I have two answers for that: The simple easy one, no, the second, a statement, shame on you for asking.”

After telling a grown man “shame on you” during a live phone interview, and with a little more back-and-forth, Stern dropped the bomb: “Have you stopped beating your wife yet?”

USA Today reported the NBA has since issued a statement about Stern’s jaw-dropping statement that goes like this: “What it is is a classic unanswerable question, same as the one the Commissioner was asked?”

The Detroit Free Press further explains that, what Stern meant by the strange shot, is “it’s an old cliché for a trick question to which there’s no good answer.”

The conversation somehow managed to go on after that — albeit awkwardly.

When Rome expressed his concern about Stern’s holding a grudge against him, the Commissioner said, “I wouldn’t hold it against you… But it’s good copy. You do these things for cheap thrills.”

Rome does start to burn, and Stern calls him out on it.

“Now Jim Rome is pouting… You want to hang up on me?”

By this point, Rome really is (finally, mercifully!) running out of time. So Stern ends the interview pretty much the same way it began.

“I have to go call someone important now,” Stern retorts. “Stephen A. Smith is up next.”

Ouch. Burn. Smith is another sports journalist at a competing network!

It’s fair to say that this on-air abomination is making a lot of fans who already loathed Stern feel a lot better about that loathing.

How far out of bounds was Stern? Or do you “get” what he was saying — just a poor choice of words?