The daughter of the famous “pit bull with lipstick” is getting served for defamation by the bar-goer whose heckling went viral last year. Hollywood talent manager Stephen Hanks claims Bristol Palin invaded his privacy and that the incident, where the 21-year-old called his sexuality into question quite publicly, was “emotionally distressing.” How will Palin bite back? 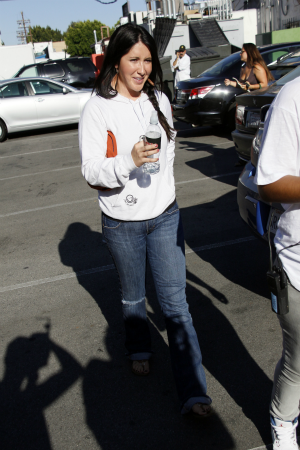 Just in time for the June 19 debut of Bristol Palin’s reality TV show, Life’s a Tripp, the famous daughter is getting sued.

Now, Reuters reports, Hanks is suing Palin in connection with that heated exchange at the famed bar-restaurant.

Hanks claims he has suffered “emotional distress” and that his privacy was invaded after Palin, first, publicly questioned his sexuality during the confrontation. And, second, that she “defamed” him for telling In Touch that their encounter was the reason she got out of Los Angeles.

According to portions of the lawsuit, obtained by Reuters, Hanks has stated: “Bristol Palin’s conduct was outrageous.”

The statement also reads that Hanks was accused of being a homosexual “in a degrading manner” and that Palin’s insinuation that he’s to blame for her heading back to Alaska is bogus.

“She had purchased her home in Alaska … more than two months before the encounter,” the lawsuit, by way of Reuters, adds.

Hanks is also suing Lifetime over its use of video from the confrontation in the 21-year-old’s upcoming reality TV program.

The lawsuit alleges that Hanks did not give the cable channel permission for him to be videoed for Life’s a Tripp.

Snippets from the exchange include, following Palin riding a mechanical bull at the bar, Hanks yelling: “Did you ride Levi like that?”

He also went on to refer to her polarizing mother as the “(expletive) devil.”

Palin, showing the pit bull-ness her mama gave her, shot back: “Why’s that? Is it because you’re a homosexual?”

The conversation continued to descend into the toilet from there, with Palin eventually saying she “could tell” he was a homosexual after Hanks answered, “Pretty much!” to her (see above) invasive question.

E! Online reported that Hanks later apologized to the feisty Alaskan: “I am very passionate about politics, and believe in equality for all Americans.

“I expressed my feelings in an improper manner in the heat of the moment, and allowed my emotions to get the better of me.”

The bad blood appears to remain — as insiders say Hanks is going after Palin for more than $75,000.