Looks like House Hunters on HGTV is joining the ranks of Cash Cab and The Kardashians franchise as the latest “reality” series to be accused of full-on fakery. 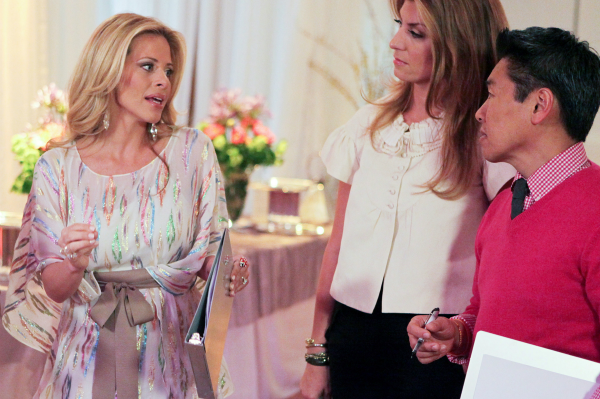 House Hunters may need to remove the “hunters” part of its title, thanks to the (latest) former guest claiming they had already closed on their house of choice before filming began.

Bobi Jensen (for those avid House Hunter fans out there, her family was featured during a special “Texas Week”) tells the whole ugly story to Hooked on Houses.

From the get-go, she alleges, producers didn’t like the family’s story.

Their plan to move into a bigger house and rent out their existing one was deemed tired and boring, Jensen explains.

So what’s a producer to do? Jensen says they developed their “own” story that went something along the lines of: The Jensens have a growing family. They need a bigger house. Stat. This is an emergency.

Perhaps the biggest kicker? Jensen says the House Hunters team wouldn’t allow the family on the 13-year-old show until they closed on a house.

Which, obviously, begs the question: What’s the point of the show? The guests are supposed to be house hunting, right?

Jensen says, among other examples of alleged fakery, the family had to “pretend” to scramble to find a house for the cameras. They had, after all, already picked out their home from the three “choices” featured during the show.

She also says the homes featured as “possibilities” for the family weren’t even for sale. Jensen claims they were actually her friends’ homes — the friends that were kind enough to clean up their abodes for the cameras.

In 2010, when Hooked on Houses first exposed that House Hunters may be a bunch of fakers,  another former guest named Nate seemed to substantiate these claims.

In a short statement, he said: “It isn’t just sometimes fake — it is ALWAYS fake … They won’t even consider you for the show unless you already have a purchase agreement signed, and have access to both your new home and your former home for the duration of the filming period.”

At the time, House Hunters had stated: “For quicker turn-around, producers sometimes choose buyers who are already in escrow with one of the three locations shown. The other two choices that are filmed, are only shown to allow viewers the option of making the choice themselves.”

In a statement published earlier this week in Entertainment Weekly, a publicist for House Hunters doesn’t quite go as far as the previous statement: “We’re making a television show, so we manage certain production and time constraints, while honoring the home buying process. To maximize production time, we seek out families who are pretty far along in the process.”

Said publicist also goes on to say that the audience still gets to “play along and guess which one the family will select.”

“It’s part of the joy of the House Hunters viewing experience. Through the lens of television, we can offer a uniquely satisfying and fun viewing experience that fulfills a universal need to occasionally step into someone else’s shoes.”

Since 1999, House Hunters has regularly been featured among the “most popular” of HGTV’s many Mr. Fix It-style reality programs. In 2006, it even spawned House Hunters International.