Kristina Riggle made a splash on the women’s fiction scene with her debut novel Real Life & Liars. Since then, she’s written two more novels, and this week her fourth book is coming out. Called Keepsake, it focuses on what it means to be a hoarder and what that might do to the people around you. Riggle always writes books with sympathetic characters and compelling plots, which is why Keepsake is a must-read. 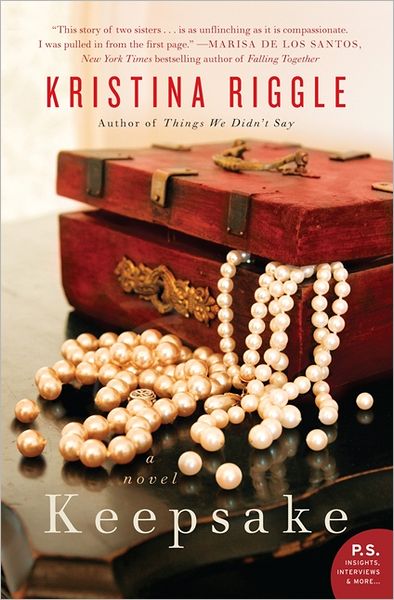 Trish is a good mother to her two children. She’s devoted to her sons, and though things haven’t always been easy after the divorce, Trish is raising the kids on her own — and she loves her life. She knows her house is messy, that there are piles of things here and there and stuff scattered everywhere, but she doesn’t give it a second thought. After all, what house with kids living in it really is clean? It’s not that important to provide a pristine environment for her children — what’s crucial is that she loves them and supports them. Trish tells herself that the mess around the house isn’t important and doesn’t affect their day-to-day lives.

But all that changes in an instant, when her younger son is seriously injured inside the house after a pile of that oh-so-harmless stuff falls on top of him. Not only is Trish scared to death by the fact that her child was hurt, but Child Protective Services comes knocking at the door. It’s not possible that Trish is a hoarder, she tells herself. She knows her mother suffered from this affliction, that she hoarded everything in sight and that the childhood home Trish grew up in was little better than a trash heap, but Trish hasn’t inflicted that on her boys. Has she? Trish must face the realities of the situation. She has to clean up the house or she might lose her sons. But at what point does a compulsion become an addiction? Trish realizes that she needs help and reaches out to her sister, Mary.

Mary is Trish’s opposite — after growing up in their childhood home, she moved far away and keeps her house absolutely immaculate. But when she receives Trish’s distressing news, Mary steps up to help in any way she can. Together, the two sisters will work to clean up the house and help Child Protective Services see how much Trish loves her sons and how she’d do anything for them. But going through things can bring up old feuds and bitter resentments that have carried over the years, and these two sisters are about to redefine their relationship as they clean Trish’s house.