This male fantasy fulfillment comedy gets its laughs from all things inappropriate. But what else would you expect from Adam Sandler in this father/son romcom? And the barf and other bodily fluid on the wedding dress is an extra-nice touch. 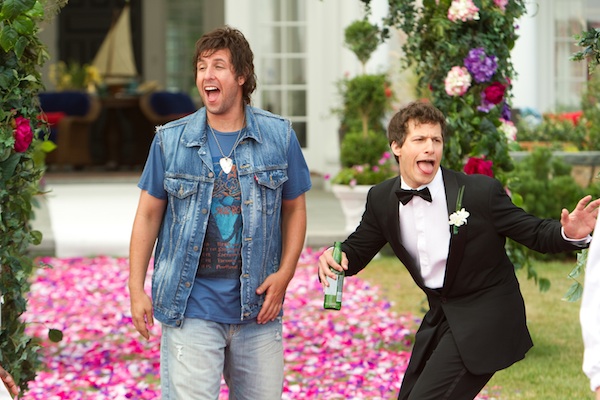 The movie starts in 1984 with 13-year-old Donny Berger (Justin Weaver) who gets seduced by his math teacher Mrs. McGarrigle (Eva Amurri Martino). The story is taken from a real-life headline that doesn’t exactly strike me as fodder for a comedy, but I’m not Adam Sandler. When student and teacher are caught in the act, young Donny becomes a legend and pregnant Mrs. McGarrigle gets 30 years in the slammer. Donny gets custody of his son, whom he names Han Solo, when Donny turns 18. But he’s so bad at single parenting, Han Solo abandons his bad dad and reinvents himself.

Han Solo is now a neurotic hedge fund manager who calls himself Todd (Andy Samberg), and is about to marry a spoiled little rich girl named Jamie (Leighton Meester) who loves to demean him. So traumatized by his childhood, Todd’s forced to take two Xanax each morning and carry a pair of “security underwear” in his pocket — just in case. 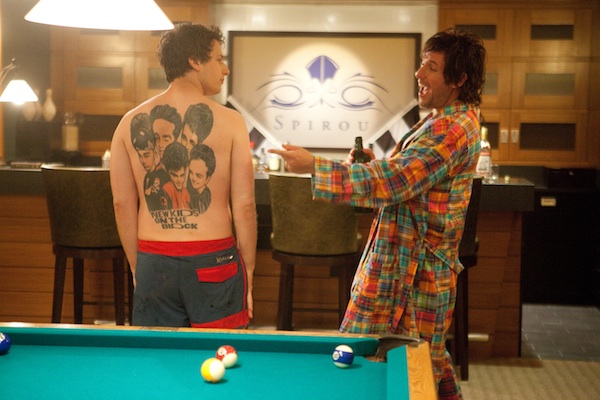 When older Donny Berger (Adam Sandler) discovers he owes thousands in back taxes, he devises a plan to reunite his son and former teacher-lover in an effort to cash in on what’s sure to be a hot reality TV reunion.

So Donny shows up at the giant mansion on the Cape where Todd, his fiancée, her family and Todd’s boss Steve (Tony Orlando) prepare for the extravagant nuptials.

Here, Sandler is in his element as the beer-guzzling, mulleted, walking embarrassment-of-humanity, ready to offend everyone and their mother.

When Donny looks for inspiration to have a wank, he picks Jamie’s Grandma Delores’s (Peggy Stewart) photo. The double frame has a picture of her as a young bathing suit model and now as the octogenarian. Having known only older women from a young age, you can guess which picture really does it for him.

In a new twist on the bachelor party, Todd, Donny and other hedge funders go to the spa for facials and nail treatments, “making good use of a Groupon.”  But Donny can’t stand to see his son have such a dismal marital sendoff and takes them to his favorite strip club to do the bachelor party old-school style. 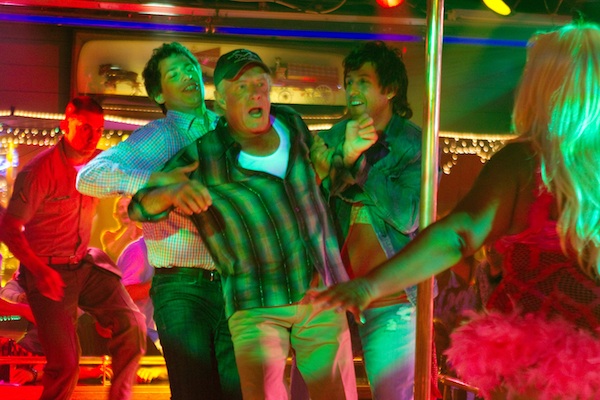 Underneath all the sleaze, Donny truly wants his son to be happy. That’s why he changes his mind on asking Todd to be part of the reality TV money-making scheme. But when Todd starts to accept his father for who he is and shows up at the women’s prison to reunite with his mother (30 years older now, played by Eva Amurri Martino’s real-life mother Susan Sarandon!) he’s in for a big surprise.

That’s My Boy is at its best with uncomfortable sexual liaisons and bringing back icons like Vanilla Ice from the 1980s. There are lots of laughs, but the movie feels a tad long at nearly two hours.

Bottom line: This R-rated comedy is rude and crude but funny. It’s boys acting like dirty, reckless boys with some really fun ’80’s flashbacks. Just be prepared for the potty humor.