A new The Hollywood Reporter account is offering a nightmarish look inside Brad Pitt’s darling — World War Z — and we’re not talking about the flesh-eating zombies. In fact, weeks before shooting was to begin, the floundering filmmakers were still bickering over what the zombies were going to look like which, insiders claim, is not an isolated incident but indicative of the disaster characterizing the entire production. 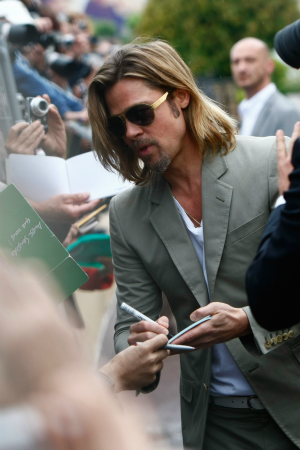 What was supposed to be Brad Pitt’s zombie movie to end all zombie movies, World War Z, was doomed from inception, with the addition of Prometheus screenwriter Damon Lindelof to re-do the end of the flick only the latest in a series of crippling setbacks.

Originally, the movie was to debut in December, coinciding with Paramount’s centennial celebration. With a bloated budget soaring past $170 million, it’s now slated for a summer 2013 release.

But the epic flick-turned-epic fail was plagued with problems from the get-go. First, it alienated fans of the book it’s supposed to be based on — World War Z: An Oral History of the Zombie War. Instead of staying true to the basic premise of the bestseller, which chronicled the struggles of humans finally emerging victorious after a long and brutal zombie war, Pitt’s production company behind the flick changed writers — and scripts.

In the end, they opted for a much more familiar, and much less “fresh” tale — the old “rugged, hot humanitarian (Pitt) traverses the world, racing against time to stop the zombie pandemic toppling armies, governments and maybe humanity itself.” Blah, blah.

Now,  Lindelof’s rewrite of the final act of the never-ending saga will also require complex reshoots on an already devastated budget.

But these incidents only bookend the series of problems that have left the production in ruins.

Not in this exact order:

— Finding Neverland’s Marc Forster was brought on board as director. Problem is, he has no experience with effects-heavy epics like Z. Confusion and infighting ensues.

— More to the confusion part, Pitt himself played real-life hero when he swooped in and saved an extra who otherwise would have been trampled while filming a scene with 700 actors in Scotland.

— Production came to a halt when Hungarian anti-terrorism officers seized 85 rifles from a Budapest warehouse. They were to be used in filming but, one catch, they had been transported illegally and, oh yeah, did we mention they were working automatic, military-style assault rifles?

Scared at what the final mangled mess may look like by the time it appears on the big screen? Don’t blame you.

But, hey, nothing can be as bad as another action flick that also involved humanity’s survival against all odds.