The Magic Mike red band trailer is here! Think you’re ready for this? Better get that cold shower ready. 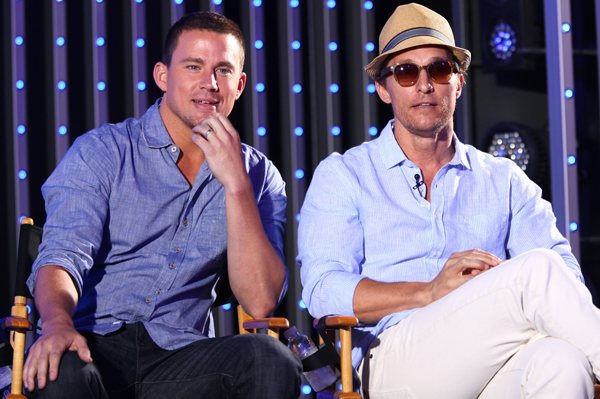 The NSFW look inside the male stripper movie deals mostly with the stripping part of the story — none of that pesky romance stuff is included, thank goodness. We also get to see Bomer thrusting on a lucky woman, Tatum’s bare behind and McConaughey in a thong. Oh, and see why Joe Manganiello’s character is named “Big D**k Ritchie, though we only see a silhouette — not the full monty.

Another thing we notice? All the guys are really bare in the trailer — as in no body hair.

“We all had to go there,” Bomer told People on Tuesday night of the manscaping. “I’m not going to say it was fun, and personally I will never do it again, but for that project it was necessary. We were all in the boat together.”

He as happy to do it since it was integral to the character.

“What was important to me was to tell the story authentically, and I wanted to reflect what the dancers in real life do. And that’s part of their job,” he added of the movie, loosely based on Tatum’s experiences as a male exotic dancer.

“Channing is one of my favorite people I’ve ever gotten to work with. He was incredibly accessible to all of us, which was really important in being able to tell this story,” Bomer added to Zap2It. “He created this environment that was very ensemble-oriented, even though he was ‘Magic Mike.’ He made everybody feel special and welcome.”