As wedding rumors surround Kim Kardashian and Kanye West, one can’t help but be reminded of Kim’s last matrimonial bust. It would be our fondest hope that Kim learned a thing or two the first time around, but in case she’s got her head in the sand, we’re here to help with a few wedding to-don’ts. 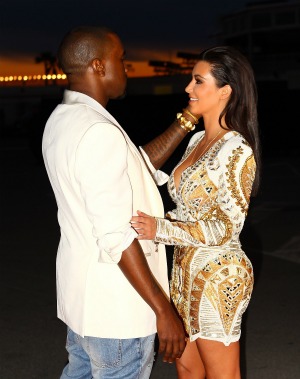 Don’t tell anyone you are getting married. Ideally, the first to-don’t in this list would be — don’t get married. But who are we to stand in the way of celebrity wedded, um, bliss? So if K2 is hell-bent on getting married, we beg that they just keep mum about it. This could be a challenge for a girl who is, like, paid to, like, spill her, like guts about, like everything. Kimmy, if you do blab that you are getting hitched, be prepared to become fodder for late-night talk shows, The Onion, The Soup, SNL, yeah, pretty much everyone with a heartbeat. Don’t say we didn’t warn you.

Don’t get married anywhere but Vegas. We recommend a Britney Spears/Jason Alexander marriage all the way. In a drunken stupor, in the middle of the night, in jeans and a baseball hat. Vegas weddings are easier to annul, should K-K need to, and if they do annul it’s the only way Kim will beat her own record for short-term marriages.

Don’t spend any money and don’t expect any gifts. Which if you take our Vegas advice, shouldn’t be a problem. There are countless reasons the Kim/Kris Humphries 72-day marriage left a bitter taste in the mouth of pop culture, but one of them was that a reported $10 million was spent on the mockery of marriage. The masses found this offensive when you consider that 10-mill could feed a Third World country for about three years and that our own country’s economy has been in the tank for a while now, leaving many Americans without. Also, since Kim is probably still returning expensive gifts from her circus-de-wedding, there’s a good chance she won’t be getting any crystal this time around. It would make everyone feel better if Kim and Kanye honeymooned in Detroit and threw $50 bills at everyone.

Don’t have kids right away. For all the Kardashian girls’ exotic looks, ample curves, and skills at being famous for nothing, their ability to pick decent guys is a bit compromised (maybe with the exception of Khloe). We all remember the episode where Kim wanted to have babies with Kris. Then she didn’t. Then she did. Then she thought she was pregnant. Then she wasn’t. We can’t help but wonder if it’s time for Kim to just put her uterus in a holding pattern. If she makes it to Day 73 with Kanye, then they can start talking about building a family.

Don’t get married after Brad Pitt and Angelina Jolie. Kim, being the master of making headlines, probably doesn’t need this tip. Just as a friendly reminder however, we’d like to underscore the importance of getting married 24 to 48 hours before the Pitt-Jolie union. That way, you have half a prayer of generating a few tabloid headlines. The truth is, not very many people are going to care or pay attention to the Kim/Kanye wedding, if there is one, but if special care is not given to the timing of it, it may go unnoticed for say, 72 days.