Aside from bizarre online videos about her life in exile and “sightings” by private investigators, America’s most hated mom has been as elusive as Bigfoot since going into exile nearly a year ago. CNN’s Piers Morgan shared snippets from a telephone interview with Casey Anthony yesterday on his show and has managed to light up the Twitterverse in the process. 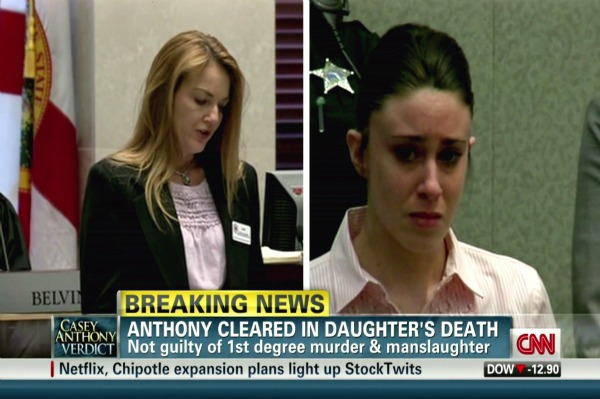 With her attorney giving “color commentary” throughout the broadcast, CNN’s Piers Morgan read statements from a conversation he had with Casey Anthony on Tuesday afternoon.

The 26-year-old still insists she did not kill her 2-year-old daughter, Caylee.

“There’s nothing in this world I’ve ever been more proud of, and there’s no one I love more than my daughter,” Anthony said, by way of Morgan. “She’s my greatest accomplishment.”

The many who were outraged that Anthony was free to walk following her daughter’s murder trial, will be none-too-pleased about her lawyer J. Chaney Mason’s admission to Morgan: Anthony’s not ruling out more children.

“She probably would,” Mason said, when asked if Anthony would consider being a mom again. “It would take a long time (though) for her to be accepted.”

No celebrity gravy train to ride

The Daily Mail reports that Anthony’s first exclusive interview could have fetched as much as $750,000.

The TV host squashed rumors during the Tuesday broadcast that Piers Morgan Tonight was paying big for the exclusive.

“I’m not making gazillions of dollars,” Anthony said. “I don’t give an (expletive) about money.”

So what’s life like for Anthony, now that she’s in exile someplace in South Florida?

Anthony avoids watching the news, presumably for fear of seeing reports about her. She said during the broadcast that her public perception is “absolutely horrible.”

“She doesn’t watch these so-called reality shows that are about as real as wrestling,” Chaney added.

The attorney also told Morgan she enjoys reading a lot of fiction — including The Hunger Games. Oops. Probably not the best admission for the lawyer to make, considering that statement is catching a lot of flack on Twitter as the trilogy is about children.

Evidently, Chaney didn’t realize that, so Morgan pointed it out to him. He said he hadn’t read the books himself, but knew they were popular (“like Harry Potter,” Chaney said).

Of course, people want to know, “Where in the world is Casey?” Anthony probably has good reason to fear for her life amid sketchy reports about her latest appearance. Those reports, she understandably fears, could help lead people with less-than-noble intentions to her hiding place. But there was almost a strange preoccupation with Anthony’s looks during the 20-minute statement.

Reports have flourished that Anthony has been eating her heart out, literally, while in hiding — with RadarOnline.com claiming previously that the 20-something had gained so much weight that she was “unrecognizable.”

In videos that have surfaced during Anthony’s exile, she doesn’t mention her late daughter. Arguably, the blond bob she sports in one of the videos generates more online interest than some of the intricacies with the case.

Does this interview change your perception of Casey Anthony?