Welcome to manhood, David Arquette! The 40-year-old actor is celebrating his new official status in life, after having participated in an impromptu bar mitzvah at Israel’s Western Wall. 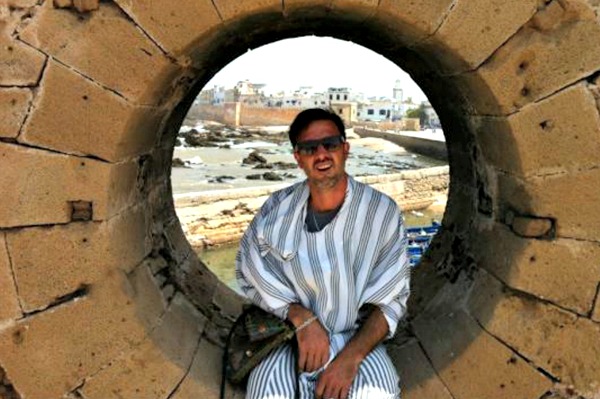 David Arquette’s bar mitzvah has finally made him an official man. The actor, 40, tweeted his joy over having completed the ceremony, although he also admitted to being embarrassed by his lack of knowledge about Judaism.

On June 4, David Arquette tweeted the photo above along with the message, “In Morocco at a Portuguese fort.” The actor is currently abroad filming his new travel show, Mile High.

Monday he updated Twitter followers about one particular travel experience that came as a surprise, writing, “I had my Bar Mitzvah today at the wall. Finally I’m a man.”

News sources report the actor, who became estranged from wife Courteney Cox in 2010, had been at Israel’s Western Wall attending another bar mitzvah ceremony when he was invited to have one himself. David Arquette, who was raised in a religious commune in Virginia, was born to a Jewish mother, while his father converted from Catholicism to Islam.

“He was very emotional, saying he was happy to be part of the chain of the Jewish people,” Shmuel Rabinowitz, the rabbi who presided over the ceremony, told the Associated Press. “I’m very pleased to see a man who is returning to his roots.”

While most who undergo the right of passage are still boys, customarily at the age of 13, David Arquette seems proud to have had his bar mitzvah at any age.

Hopefully up next for the actor is a bit of rest after so much travel. He tweeted Tuesday, “Thanks to all the well wishers. I told a reporter I was 41 yesterday but I realized I’m only 40. True story.”