Whoopi Goldberg and fallen-from-grace writer James Frey have both been on the receiving end of a long-term, metaphorical “side-eye” from Miss O through the years. They were later “pardoned.” Now we can say “Case Closed” on the six-year stare-down between the media mogul and rap giant 50 Cent, following their public “Come to Jesus” talk on OWN Sunday. 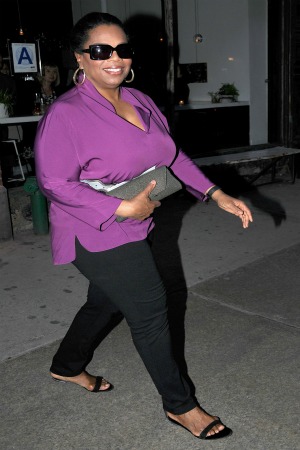 Rapper 50 Cent graced Oprah’s presence for an interview for the first time (yes, first time) this weekend. What would cause a media sensation like Oprah to have such a delayed sit-down with the music artist? Turns out the feud started — but didn’t end — with 50 Cent’s choice of name for his dog.

“I heard you had a bitch named Oprah!” the Queen of Daytime, Nightime and Anytime said, while confronting the rapper Sunday evening on Oprah’s Next Chapter.

While it’s true, 50 Cent said (while probably wishing he was dodging more actual bullets than Oprah’s verbal ones), he also claimed it was a “compliment.”

Oprah was having none of it.

“That was not a compliment,” she said.

Knowing there was no way out of the situation, 50 Cent admitted to his feeling threatened by Oprah’s criticism about the content of his music, and the culture his music was fostering.

In other words, there was some ill intent with the decision to name his female pooch after the star. Incidentally, 50 also has a cat named Gayle (for Miss O’s BFF Gayle King).

“I was saying, ‘If I can’t be your friend, at least let me be your enemy,'” the musician born as Curtis James Jackson III said.

While Oprah was at it, she also confronted Jackson about his public distaste in the past for her audience, which E! Online reported as his saying the star had, “White women in [her] audience that were as old as [his] grandmother.”

Miss O took offense, and Jackson explained he was just reinforcing that her audience is conservative. He didn’t mean anything by it.

With 50 and Oprah clearing up their misunderstanding, there is hope for others on her “Wall of Shame.” Here’s looking at you, Joan Rivers, Chris Brown and David Letterman.