Of course, the conservative group lending support to the country star is GOProud, a national organization billing itself as the “voice of gay conservatives and their straight allies.” Intense speculation remains about how Carrie Underwood’s pro-gay marriage stance, made public recently in U.K.’s The Independent, will impact the career of a hit-maker with a traditionally socially conservative fan base. 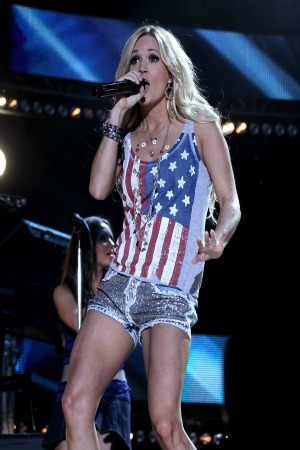 A day after Carrie Underwood’s pro-gay marriage stance went viral, conservative group GOProud is giving the thumbs up to the star’s own coming out of sorts on the still hot-button issue.

“Good for her,” GOProud‘s co-founder and executive director Jimmy LaSalvia told the Los Angeles Times. “Carrie Underwood isn’t any different from anyone else in America.

“The more Americans think about how issues affect their gay friends and family the more they come to realize that supporting same-sex civil marriage is the right thing to do,” he added. “More and more people are coming to that conclusion — and that includes conservative Christians.”

But LaSalvia’s statement may be more encouraging and optimistic than the true state of the country indicates.

In fact, if the sentiments expressed in publications such as The Christian Post are any indication, there remains a wider gulf between those organizations such as GOProud — which pride itself in its fiscal conservative-ness and limited government positions — and those highly socially conservative groups.

Following Underwood’s stance going viral yesterday, a Christian Post report said the songstress who shot to stardom on American Idol “surprised many with her support for same-sex unions.”

The publication also seemed more preoccupied than more mainstream pubs with the Oklahoma-born Baptist’s choice of church, saying, “Underwood and her husband, hockey player Mike Fisher, attend a nondenominational congregation that has an unconventional understanding of God’s word. She feels that the most important tenet of Christianity is love.”

Responses immediately following that report included: “She is wicked, not a Christian.” “I had no idea that she would fall this far…” “And hell keeps getting bigger and bigger…”

The expected backlash from a socially conservative fan base has been likened frequently in recent hours to the outcry expressed by fans when the Dixie Chicks came out against President George W. Bush and the Iraq War.