It could be said Rihanna is known as much for her sexy poses in next to nothing as her songwriting, but now British tabloid The Sun claims that the assets on display in an Armani ad from earlier this year aren’t the singer’s — but those belonging to Irish model Jahnassa Aicken. 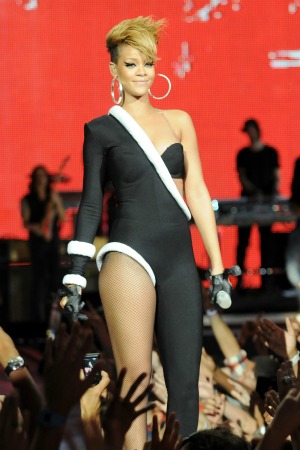 The scandalous ad in question features what’s (supposed to be) all Rihanna, first reclining on a large bed clad in underwear, and then cutting away to close-up shots of her getting out of bed, picking up a telephone, and slipping into a pair of Armani jeans.

It’s the curves behind those close-ups that The Sun alleges belong not to the singing sensation but to Irish model Jahnassa Aicken.

Rihanna was incensed by the rumors and let loose on Twitter.

“OK @thesunnewspaper, this is the only way I could say this to you!!! F**K YOU …” she tweeted. “And yo baggy ass condom” (whatever that means).

But, despite Rihanna’s denial, The Sun claims the singer should know the 27-year-old model.

They say Aicken was booked by Belfast-based Style Academy agency and paid a “modest sum” to step in for Rihanna during the shoot, which allegedly features close-ups of Aicken’s cleavage, bum and torso.

Though Rihanna doth protest, both the tabloid and the singer can agree on one thing: A lot more people know Aicken now.

Rihanna later indicated her temper may have got the best of her, telling her more than 20 million fans: “OK enough of that! I coulda been more clever about it, but I was lazy.”

We can safely assume that, if Aicken was indeed brought in as a double, it wasn’t because Rihanna’s bashful about her bod.

Earlier this year, she told another British publication, Women’s Fitness, that she gets over her “body issues” by “taking it all off.”

Hardly the words of someone afraid to show a little tush and tummy for a luxury brand’s spot.