Miley Cyrus may be dreading that she changed her profile pic, as it was only two months ago that another Twitpic caught a lot of public flack. That pic featured the newly engaged star smelling fast food in a bag with the message: “I can’t eat it. So I’m just gonna smell the s*** out of it!” She’s drawing the same criticism from those who claim there’s more to her slimmer bod than gluten and lactose allergies. 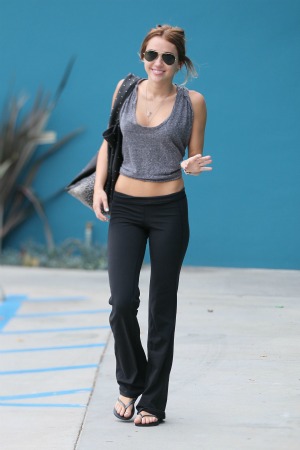 This profile pic has been removed, though the current one does boast similar features — the hair, makeup and pose look familiar. The previous pic may have gone AWOL, but controversy remains surrounding the image — featuring a slimmer Miley Cyrus in a vintage-style corset and sultry pose (feel kinda icky saying “sultry” about Hannah Montana!).

Instead of the impending nuptials being the topic of conversation for the star, all eyes were focused on the pic. Though critics noted its artsy feel, everything seemed to come back to two things: Miley’s, erm, assets courtesy of the corset and, again courtesy of the corset, her teeny-tiny waist.

Not everyone is chalking the slender figure up to simply the powers of a corset.

The 19-year-old posted another Twitpic this spring, showing her taking a big whiff from a bag of fast food with the comment: “I can’t eat it. So I’m just gonna smell the s*** out of it! My mouth is LITERALLY watering.”

Cyrus got a lot of heat from people about her seeming disgust of and refusal to eat the food, which seemed to draw a bigger spotlight on the former Disney star’s smaller frame.

She squashed the rumors, insisting in another tweet: “For everyone calling me anorexic I have a gluten and lactose allergy.”

Lately, Cyrus has also been photographed a lot in workout duds, and has credited her toned bod to an intense workout regimen as well.

Regardless, the Cyrus family is everywhere!

Within days of Cyrus announcing her engagement to Aussie actor Liam Hemsworth, older bro Trace Cyrus and his fiancée (another ex-Disney star), Brenda Song, called it quits on their eight-month-long engagement.