Ridley Scott’s sci-fi epic Prometheus opened over the weekend, and while fans expected a prequel to Alien, what they got was conversation-starting science fiction. The film asks several massive questions. Today, screenwriter Damon Lindelof tries to answer a few of them. 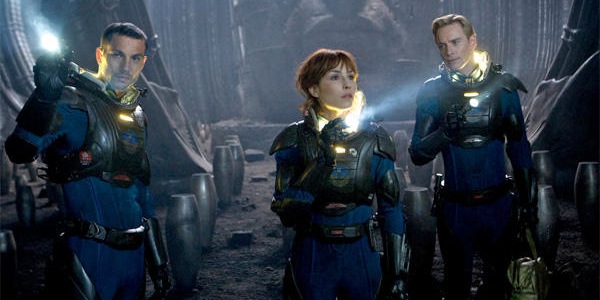 Did you happen to catch Sir Ridley Scott’s Prometheus over the weekend? Did you enjoy it? Perhaps the better question is, “Did you understand it?”

While marketed as a possible prequel to Scott’s seminal work Alien, Prometheus instead stands alone as a weighty, meditative sci-fi thriller that asks such significant questions as “Where do we come from?” and “Where might we go when we die?”

Needless to say, those questions are difficult to answer with any certainty, but that didn’t stop MTV from peppering Prometheus screenwriter Damon Lindelof (who also wrote for the twisty Lost) with key questions during an informative e-mail exchange.

It goes without saying that the conversation between Lindelof and the network is spoiler-laden. In fact, most of what we talk about for the rest of this piece will include specific references to Prometheus. So if you haven’t seen Scott’s film yet and still plan to, click elsewhere and avoid ruining the experience.

Still here? Well, Lindelof explains that the original script he revised had plenty of direct connections to Scott’s Alien, and it was his responsibility to tone them down.

“The script I got was written by Jon Spaihts,” Lindelof says. “He is a wonderful person and a great writer and his script reflected both. However, he had been tasked with executing the very specific task of making the story very Alien-y (not a word) and it was rife with eggs, facehuggers, chestbursters and the Xenomorphs they grew into. If memory serves, the eggs show up around the end of the first act and the familiar progression of fertilization and gestation begins, at which point, all hell breaks loose.

“My job was to strip out the familiar Alien stuff and rebalance the plot mechanics so that stuff felt more like the RESULT of the story as opposed to the catalyst,” he continued.

Other times, Lindelof avoids giving specific information. Late in the film, there’s a moment when Michael Fassbender’s character, David, says something in a foreign language to the Engineers, or the aliens in the film. When asked what the mysterious line of dialogue is, Lindelof coyly dodges, “David’s dialogue with the Engineer has an English translation, but Ridley felt very strongly about not subtitling it.”

Fair enough. The conversation continues over at MTV, and no doubt continues in film circles around the globe. Prometheus opened to an estimated $50 million in the States. Enough to make the sequel Scott teases at the end of his film? We shall see.