Paris Jackson talked to Oprah Sunday night about her past, present and future. Find out how she deals with a problem millions of teens face every day: bullying. 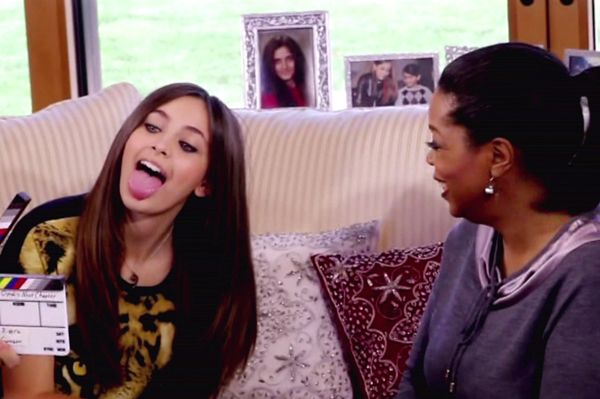 Paris Jackson has grown from the blonde-and-masked daughter of Michael Jackson into a poised and precocious 14-year-old. The teen actress sat down with Oprah Winfrey over the weekend to talk about her famous father three years after his death. The biggest revelation? It’s not that she misses her dad (of course she does) — it’s that people try to bully her.

Sucks to be the bullies, though: Paris doesn’t care what they think.

“People have tried [to bully], but it doesn’t always work,” she revealed to Oprah. “Both at school and some people try to cyber bully me.”

“They try to get to me with words, but that doesn’t really work,” she told Oprah, adding that she didn’t know whether or not her haters were just jealous of her life.

Paris does know when people are being fake, though.

“If I feel someone is being fake to me, I will just push away,” she said, adding that her real friends understand that she has to have security at all times. “They think it’s kind of creepy, but some of them don’t really care.”

The young Jackson also talked at length about her King of Pop dad, telling Oprah that he was just a normal father — well, a normal father who made his kids wear masks in public.

“I was really confused. I didn’t get why I was wearing a mask. But I understand now why my dad would want our faces to be covered,” she told Oprah of those infamous face coverings.

“When we went out we wouldn’t be recognized; we could have a normal childhood. Our dad was a really normal father when he was with us.”

Michael would be proud of how his little girl is growing up — with a real childhood.