Blake Lively is the cover girl for the new issue of Marie Claire. Inside, Lively reveals why she doesn’t have a stylist and what she really thinks about shooting a gun. 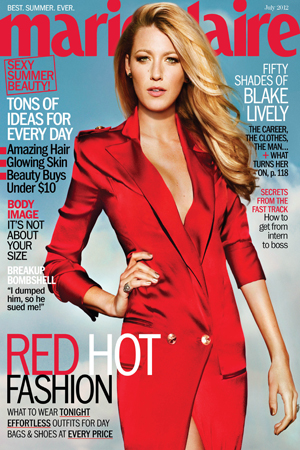 Blake Lively is so perfect it makes us sick: She has the perfect hair, the perfect body and the perfect boyfriend. Of course, the Gossip Girl star says her life isn’t as perfect as everyone makes it out to be —  and she’s nothing like her character on the hit CW show.

“People like to draw parallels between my life and the scandalous stories on Gossip Girl. I dress the same as my character, so they think she lives this life on and off set,” Lively, 24, told Marie Claire in her July cover interview. “I recently shared how many boyfriends I’ve had [four], and people were like, ‘That’s impossible!’ But it’s true. I’ve been with very few people. If I’m not with somebody who really excites or inspires me, then I’d rather be by myself.”

So, maybe she’s not perfect, but her fashion taste is — the actress doesn’t employ a stylist and still manages to look gorgeous.

“Because I love fashion,” Reynolds‘ girlfriend said of why she doesn’t have a stylist on staff. “It’s such an expression of self. I often see people and they look great, but I can identify who styled them. Every stylist has a signature. Maybe it sounds jerky, but I’m lucky to be on such a fashion-centric show [Gossip Girl]. There’s no designer I don’t have access to.” 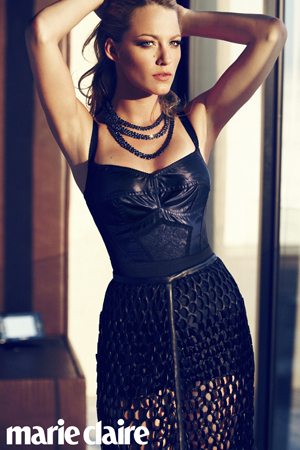 So, does she call the designers herself? Well, they come to her — and of course, she has an underling do the dirty work.

“My assistant will call fashion houses for me, but I always pick the outfit, shoes, jewelry and a lot of times I do my own hair and makeup for events. Sometimes I think, God, why do I do this to myself? It’s so much extra work!” she said.

She might love fashion, but we don’t expect her to start another obsession with guns. The actress said she got her fill of bullets and gunmetal while shooting her upcoming film Savages.

“I went to the gun range and learned how to shoot a gun for the first time. It was awful,” Lively said of learning to shoot. “I asked myself, Why were these things ever invented? But I did feel good that my first three shots were straight to the heart. It’s good to know — don’t mess with me in a gun battle.”

Hot and talented with a gun? We don’t even have a chance compared to you, Blake.