We’ve all come to expect outlandish antics from Madonna and the subsequent controversy that she is so skilled at creating. There’s staying in the headlines and then there are acts of pure desperation. Which category does Madonna’s “nip slip” fall into? 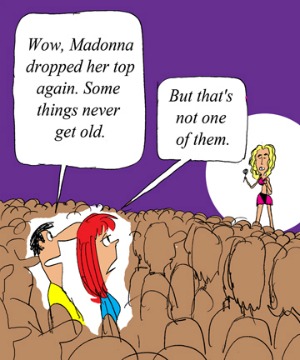 The ongoing Madonna/Lady Gaga rivalry. This seems to be Madonna’s favorite go-to spot when it’s time to stir up some attention. So before she even launched her tour, she sang lyrics to Gaga’s “Born This Way” while rehearsing “Express Yourself.” This was caught on video, and an internet controversy ensued. This is a drum that Madonna is beating maybe just a little too much, as folks are starting to ask what exactly is the comparison between a pop queen from the 80s and a chart-buster today?

Madonna superimposes swastika on image of French politician. Whaaaaaaaaaaa? Why? How many in the audience actually even recognized the photo of Marine Le Pen (who is the leader of France’s far-right National Front party, just in case, like millions of other people, you have no freakin’ idea who Marine Le Pen is). Le Pen fired back saying, “We understand how old singers who need to get people talking about them go to such extremes.” Ouch. Is this choice of “creating awareness” supposed to prove that Madonna is much more enlightened than the rest of us? That she is much more aware of global affairs than we are? Is all that tea in England going to her head? Who knows, but guess what? Though we loathe to admit it, we’re talking about her, and thus Madonna’s ploy was a success.

Another Nipple-Gate. Seriously? Flashing a 53-year-old nipple? This may be the act that pushes Madonna’s antics from “calculated marketing” to “tricks that smack of desperation.” The nipple-heard-round-the-world has been done. Everyone has nipples. This isn’t terribly interesting or unique (as Madonna herself said in an interview shortly after she flashed the audience at a concert last Thursday night). So we went from creating awareness about a French politician to flashing a nipple? I’m confused. If Madonna is going to stir up headlines on a weekly basis, can we at least have a little consistency? Is she test-marketing a few ideas to see which headlines generate the most traffic? Rivalry with another pop star. Check. Calling out a controversial leader. Check. Flashing nipple. Check. What’s next? She hasn’t ticked off PETA or Gloria Allred… yet.