Teen Mom Farrah Abraham knows what it’s like to have a “hard time,” although she isn’t set to be doing any hard time like fellow reality star Amber Portwood. Sophia’s mom weighs in on the latest Teen Mom drama! 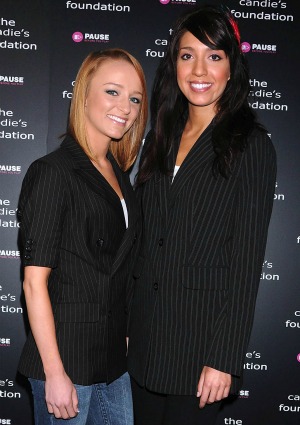 Everybody’s got something to say about Amber Portwood’s prison sentence, including Teen Mom co-star Farrah Abraham. The single mother of Sophia featured on MTV’s hit show says she can commiserate with Portwood’s “hard time.”

With the premiere of Teen Mom‘s final season slated for Tuesday, Farrah Abraham has been busy on the press circuit. During a recent stop to Ryan Seacrest’s morning radio show, the 21-year-old had just this to say about Amber Portwood‘s future: “I wish her the best.”

“I know she’s just trying to get through this hard time,” Teen Mom Farrah continued. “I’ve worked through my hard time, so I just hope she works through whatever she has to go through and is back home with her child and is happy with her family. That’s all I can say.”

Amber Portwood is just beginning the 5-year-prison sentence she requested from a judge over another chance at rehab. Though fans of the MTV show likely won’t see much of the 20-year-old, mom to 3-year-old daughter Leah with sometime boyfriend Gary Shirley, in the next handful of years, the final season of Teen Mom filmed before her prison sentencing.

In the clip below viewers get a sneak peek at Amber Portwood’s downward spiral, a newly single Maci Bookout (pictured above with Farrah) dealing with baby daddy Ryan’s new girlfriend, and Farrah Abraham making a move away from her family to Florida.

Will you be watching Farrah Abraham and Amber Portwood on their final Teen Mom season?