The truck driver who had the misfortune of being hit by Lindsay Lohan’s rented Porsche Friday may be making his own fortune. He’s lawyered up and may seek damages related to the crash — on the heels of his claim that LiLo’s people offered to pay up to keep his mouth shut about the whole thing. 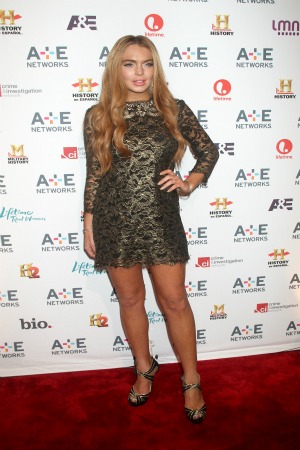 Before Friday morning, “James” was just another truck driver minding his own business — until Lindsay Lohan’s rented Porsche slammed into the back of his 18-wheeler.

Now, TMZ reports, James has lawyered up and may sue the actress for “his pain and troubles.”

This could be a chronic case of dollar signs in the eyes, as the Los Angeles Times reported no one was seriously injured in the crash.

The trucker is pursuing Team LiLo to pay up on the heels of his claim that the star’s people tried to “pay him off” with a bribe meant to persuade him from calling the cops about the accident.

“The guy took me across the street and told me this was some kind of famous person and they didn’t want to be in the media,” James told TMZ following the accident. “But I’d already called 911 because they were trying to get away from the scene.”

James also referred to a “mysterious” pink bag that he claims Team LiLo tried to hide from officers before they arrived on scene.

A rep for the 25-year-old actress told People in not as much words that James was telling a tabloid tale, and denies the bribe and pink bag incidents ever happened.

Though Santa Monica police officials say both drivers were not under the influence of drugs at the time of the crash on the Pacific Coast Highway, LiLo initially claimed that James “cut her off.”

Later, she said the rented Porsche’s brakes failed on her.

This accident and possible lawsuit come at a time when LiLo’s career seemed to be veering back toward some semblance of relevance with her role in Lifetime’s Elizabeth Taylor biopic, Liz & Dick.