Cyber-bullying is a hot topic these days. In So Far Away, author Meg Mitchell Moore addresses the issue, while still writing a book that is driven by writing and vivid characters instead of simply by cyber-bullying itself. With such a timely topic in such a well-written book, So Far Away is an obvious choice for Red Hot Book of the Week! 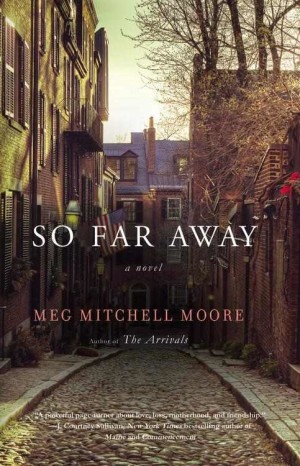 Meg Mitchell Moore made a splash in 2011 with her beautifully written debut novel, The Arrivals. The Arrivals, now out in paperback, featured a family in the midst of multiple crises. Moore wowed readers and reviewers alike by taking them into the heads of family members all at different points of life with a level of veracity and authenticity rarely seen.

In her second book, So Far Away, Moore repeats her feat of bringing to life realistic and sympathetic characters. This time her characters are drawn together by tragedy and circumstance, rather than blood, creating a story that is all the more poignant because the characters care for one another by choice, rather than by obligation.

About So Far Away

Natalie Gallagher’s home life is difficult enough — her parents are recently divorced and her mother is suffering from a serious clinical depression. On top of all of this, Natalie’s school life is becoming increasingly fraught with heartache — her former best friend ditched her and is now hanging out with the class “mean girl,” and the two of them have begun cyber-bullying Natalie.

Library archivist Kathleen Lynch has had a hard life as well. First she lost her husband when her daughter was just a baby and then when that same daughter was a teenager, Kathleen lost her to drugs and they are now estranged. Between the conflict with her daughter and her own difficulties as a young mother, Kathleen now sees girls in trouble everywhere she looks, and it breaks her heart. If only she could save just one girl, as she was unable to save her daughter.

Natalie and Kathleen are brought together by Natalie’s school genealogy project, and particularly the 1920s diary Natalie found in her mother’s basement. As an Irish maid to a wealthy Boston family, Bridget O’Connell had problems of her own. It is too late for Natalie and Kathleen to do anything to help Bridget, but her story may just give them the impetus they need to be able to help one another.