Who’s dead? Who’s undead? Who’s just getting their vamp on? Read on to find out how it all went down in our True Blood season premiere recap 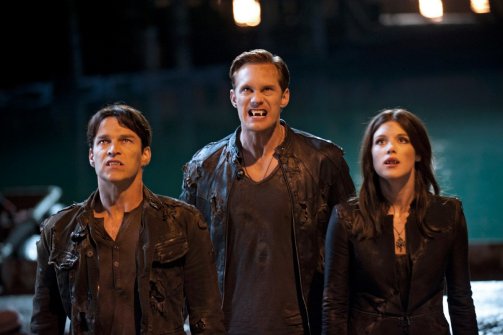 We start Season 5 of True Blood with Tara shot, Debbie Pelt dead, Nan Flanagan given the True Death, and Reverend Steve Newlin a vampire. So it’s business as usual: a lot of dead people creating problems in Bon Temps, Louisiana.

Tara is shot and has half her head missing. Pam shows up, so Sookie begs her to save her. Small problem: Tara hates vampires. Bigger problem: she’s pretty much dead. Sookie promises Pam a favor if she can rescue her, aka, turn her into a vampire. Pam gives Tara her blood, and Sookie and LaFayette start burying Pam and Tara into a grave.

Reverend Steve Newlin shows up to Jason Stackhouse’s door. The former vampire hater now has fangs. The Reverend glamours Jason into inviting him and then ties up Jason to give his confession: he’s a gay vampire American. Oh, and he loves you, Jason Stackhouse! Jason is flattered. It’s the nicest “I love you” he’s ever gotten! But he’s gotta be honest: “this dog don’t bark that way.” Steve is not pleased. He demands love. Luckily, Jason’s new lover, Jessica, shows up and kicks Steve out. She can do that because she’s the progeny of the King of Louisiana, y’all.

Bill and Eric have been kidnapped. Good news? Eric knows one of his kidnappers, a little lass named Nora, and they share a smokin’ hot kiss. And guess what? Nora is his sister! (Godric is their maker.) Eric and Nora are all Flowers in the Attic like that. Nora is working on the down-low to save Eric while working for The Authority.

Alcide visits Sookie. Normally, she would be pleased as punch to see him — but, oh yeah, she killed his girlfriend. Alcide informs Sookie that Russell Edgington is on the loose. Yeah, I’m confused, too, because last we saw him he was a pile of guts.

Speaking of Alcide, Alcide killed Marcus, who is Luna’s baby daddy. The pack suspects Sam has something to do with it. Sam, to protect Luna, goes along with the charade. Sam is then tortured by the pack. Alcide shows up and confesses to killing Marcus. Pack is not pleased.

Jason has lost Hoyt’s friendship, but at least he has Jessica. Or does he? She’s experiencing teenage rebellion and throwing parties with college kids. She seems into a co-ed at the party, but she might actually be pushing Jason away. Jason, on the other hand, must really be into Jessica because he actually refuses sex from a college chick. Who has a stomach more washboard than his, so Jason must really be into Jessica.

We end the Season 5 premiere of True Blood with Pam rising from the grave. Does Tara? Hint: The answer is the same as “Does LaFayette like saying ‘hooker?'”