Lindsay Lohan has been hospitalized following a car wreck Friday afternoon. The star’s black Porsche was totaled after slamming into an 18-wheeler, and eyewitnesses describe a bloody and bruised scene. 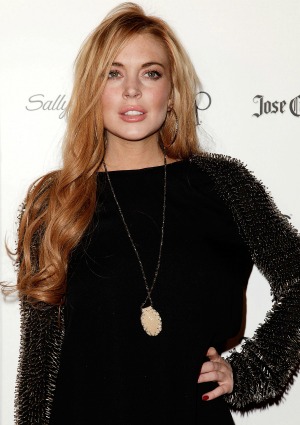 Lindsay Lohan‘s car wreck has landed the troubled star in the hospital. TMZ reports the actress was driving along the Pacific Coast Highway in California around noon on Friday when her black Porsche slammed into the back of an 18-wheeler.

Witnesses to Lindsay Lohan’s crash report the star was bruised and bloodied but “seemed ok” at the scene. It is believed that though ambulances were called to the site of the wreck, she did not enter one to be transferred to the hospital, although she is reportedly at an L.A. emergency room being cared for by doctors now.

No official word has been given on the 25-year-old’s condition as of yet, but it is believed she will be alright.

Photos of Lindsay Lohan’s car wreck reveal her black Porsche has been totaled. The passenger window, where her manager had been sitting, was shattered and the front bumper was fully taken off of her car.

Lindsay Lohan was driving the black Porsche at the time of the wreck, and witnesses report she stated the accident was not her fault — insisting the 18-wheeler had cut her off.

“I just spoke to her, she’s doing fine,” a source told Hollyscoop Friday afternoon, who reports that paparazzi may have been involved in causing the wreck, claiming a car was following the star at the time of the crash.