The on-again, off-again relationship between Modern Family stunner Sofia Vergara and Nick Loeb is apparently back on. The pair was spotted in Manhattan’s Meatpacking District on Thursday night look quite close. Get all the details! 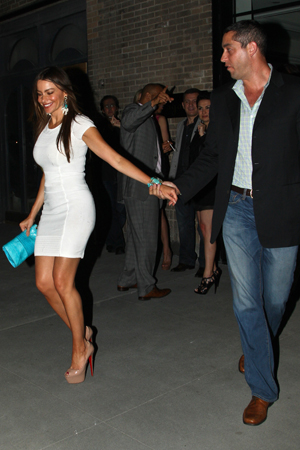 “The two laughed and flirted all night, even sharing long embraces with one another throughout the night,” a restaurant spy told SheKnows. And you know how Vergara has those sexy curves? She apparently keeps them with a steady diet of desserts, judging from her menu choices at Bagatelle.

“After dinner, Sofia ordered the Bagatelle Mega Sundae but the kitchen was closed so the owners personally handcrafted the sundae for her, presenting the dessert in an oversized martini glass that Nick spoon fed to his leading lady,” the source continued. “Sofia was glowing as she bounced around the room, even saying hi to the DJ and dancing to his beats on her way out.”

Cute! However, the pair will probably be off again before long — a source told the New York Post in May that Vergara broke off the relationship because of their constant fighting.

“Sofia was confiding in friends at the ball that she and Nick have split,” the spy said. “They have been fighting a lot recently and have been on the brink of splitting many times. It is not yet clear if they are over for good, but they are done as a couple for now.”

Sofia Vergara is the hottest woman ever, men say >>

Still, she looks happy — and that’s all that matters!

Besides her relationship, the 39-year-old Colombia native has a full summer planned: She’s reportedly attached to the new Robert Rodrigeuz film Machete Kills with Zoe Saldana, Mel Gibson and Amber Heard. The film is said to follow the Machete character as he is “recruited by the U.S. government to take down a cartel leader and stop an arms dealer from launching a deadly missile.”

Vergara will play “the leather-clad Madame Desdemona, whose Mexican heriots have information that Machete needs.”