Erykah Badu wants everyone to know that she doesn’t approve of the video for her new song with The Flaming Lips. Find out why she’s so upset. 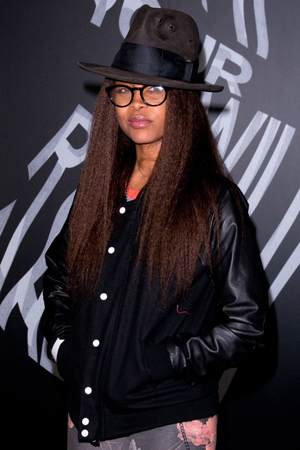 Singer Erykah Badu doesn’t think nudity in music videos is a bad thing — she’s done it herself — but a new video by The Flaming Lips has her seeing red over unapproved flesh shots.

The NSFW video for “The First Time I Ever Saw Your Face ” — a collaboration between the band and Badu — was posted on Pitchfork earlier this week and shows Badu in various stages of nudity.

The problem? She didn’t approve of the gratuitous nudity — and the body isn’t hers.

“I refused to sit in any liquid that was not water,” Badu tweeted to Lips’ frontman Wayne Coyne. “But Out of RESPECT for you and the artist you ‘appear’ to be, I Didn’t wanna kill your concept, wanted u to at least get it out of your head. Sooo, I invited Nayrok, my lil sis and artist, who is much more liberal, to be subject of those other disturbing (to me) scenes. I told u from jump that I believed your concept to be disturbing. But would give your edit a chance.”

The disturbing scenes include a fully nude Nayrok submerged in a tub with gold glitter, a red liquid and later, a stringy-looking white liquid designed to look like semen. The whole video is very provocative — and Badu thinks it’s disrespectful to women.

“I never would have approved that tasteless, meaningless, shock motivated video,” she added. “Our art is a reflection of who we are. I have no connection to those images shot in their raw version. I was interested in seeing an amazing edit that would perhaps change or alter my thoughts. Never happened.”

“As a woman I feel violated and underestimated,” she wrote, adding to Coyne, “you can KiSS MY Glittery ASS.”

At first, the band apologized.

“The video link that was erroneously posted on Pitchfork by the Flaming Lips of the Music Video ‘The First Time I Ever Saw Your Face’, which features Erykah Badu, is unedited and unapproved,” the band wrote in a statement. “Sorry!! We, the Flaming Lips, accept full responsibility for prematurely having Pitchfork post it. It has outraged and upset a segment of fans and we apologize if we offended any viewers!!!”

Steve Jobs getting a musical tribute from The Flaming Lips >>

Regardless, Coyne is enjoying the publicity and doesn’t seem to care if Badu is upset.

As for kissing her “glittery ass”?

“Hey @fatbellybella I kissed it!!!! Thanks!!!!!!” he tweeted back, along with a photo of his lips covered in glitter.