America’s Got Talent Timothy Michael Poe is still standing behind the sob story he told during his addition on the NBC reality competition. Find out how he tried to explain away a fake photo used on the show. 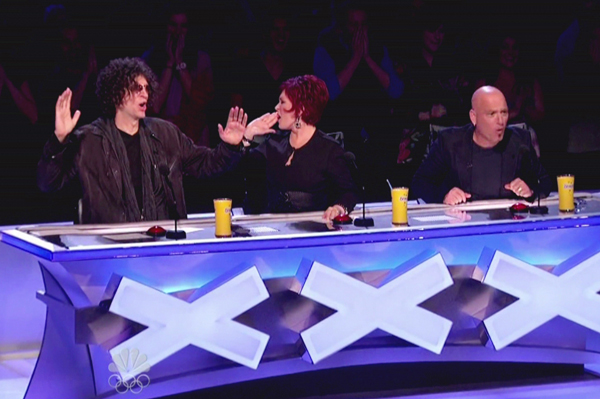 America’s Got Talent contestant Timothy Michael Poe is digging a bigger hole with his fake sob story about combat injuries received while serving with the National Guard in Afghanistan. Now, U.S. Army Staff Sgt. Norman Bone has come forward saying that the photo used on the show — one purported to be of Poe — is actually a photo of him from 2006.

“First thing that came to my mind was, ‘Why would this lying son of a b***h do this?'” The El Paso, Texas-based Bone told TMZ on Thursday. “I’m absolutely furious. Been seeing red all day.”

Bone first heard about the America’s Got Talent photos from his ex-wife, but he thought it was a tribute to the troops and didn’t think much of it. The photo is a stock photo used by the Department of Defense with the caption, “U.S. Army Staff Sgt. Norman Bone directs movement as his patrol turns around on a narrow path in the mountains of Parwan province in Afghanistan on Oct. 25, 2006.”

One of his military buddies sent him a link to the video on Wednesday and that’s when he saw what it was actually used for. Bone added that he’s never met Poe and plans to meet with military officials to explore his legal options.

And how does Poe explain the fake photo? It’s a mistake, of course.

Yep, sure. His fiancée is even involved in the lies, telling the Associated Press that Poe “downloads military stuff all the time.”

“But I know that it was a mistake on his part. It was an accident. It was a complete accident,” Carrie Morris said.

Poe’s audition — shown on America’s Got Talent on Tuesday night — captured the judges’ hearts with his story about being injured by a grenade while serving in Afghanistan in 2009.

“I had volunteered for a team to go out and clear buildings and help out with the wounded,” he said. “There was a guy who come up with a rocket-propelled grenade. I saw it coming down, and by the time I turned and went to jump on top of my guys, I yelled ‘grenade’ and the blast had hit me.”

The real story? He was in the National Guard from 2002 to 2011 but only spent a month in Afghanistan — and he wasn’t injured by an IED.

“He never actually fought in Afghanistan. He did break his back but it was in Georgia when he was in training to go on a deployment. On this particular deployment he landed in Afghanistan, got an ear infection and was medevac’d out to Germany,” Katy Edwards, the sister of his ex-girlfriend, told IBTimes on Wednesday. “While in Germany he refused to go back to the war and was brought back to the United States. His unit lost a soldier that deployment and are incredibly upset by the stories he made up (Monday) night.”

Poe still maintains that he hasn’t lied about his past, telling TMZ on Thursday that he was discharged from the Minnesota National Guard after sustaining war injuries. “My retirement orders say disability resulted from a combat-related injury,” Poe said, though he declined to back up his claims with proof.

As for his status on America’s Got Talent? He’s still a contestant as of now, though Freemantle Entertainment has issued an apology for using the photo of Bone without knowing its true origins.

“We sincerely apologize to U.S. Army Staff Sgt. Norman Bone for using a photo of him in our story on Tim Poe. It was supplied to us by Tim and used on the show in good faith. It has now been removed and will not be used again.”

Should America’s Got Talent kick Timothy Michael Poe to the curb?