Don made a play for new business and Lane made a lasting mark on the agency in Sunday night’s episode of Mad Men. 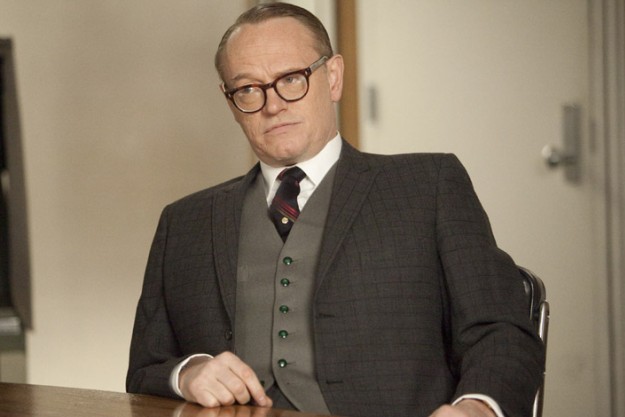 Those of us who had suspected this season of Mad Men — which has been tinged with gloom and unease since its opening hour — might end in an untimely death were sadly proven right in Sunday’s installment, “Commissions and Fees.”

In preceding episodes, Pete and Roger both seemed prime candidates for suicide (Pete, as demonstrated in “Signal 30,” has been more bitter and lonely than usual; Roger battled a pervasive sense of uselessness, right up until his LSD experience in “Far Away Places“) but the real casualty of the season’s final hours was hapless number-cruncher Lane Pryce.

Since joining the Sterling Cooper staff at the top of Season 3, Lane has always been an outsider — the glamourless bean counter trailing just behind the creatives, the wistfully romantic foreigner struggling to seize the American dream, and even the very last name listed on the door at Sterling Cooper Draper Pryce (SCDP). In ways both large and small, Mr. Pryce frequently deserved more and yet attained so little. In some respects, he was even forgotten by the thrust of this season: His money struggles, so vital to the storyline that would end his life, weren’t even introduced until just two episodes prior.

Back in “Christmas Waltz,” Lane forged Don’s signature on a check to get himself out severe debt caused by overdue taxes. This week, that same check was discovered by Burt Cooper (a character who, until this season, has felt largely functionless) and the forgery understandably raised Don’s hackles. For a man who has attained wealth and success thanks to someone else’s identity, it turns out Don is pretty protective of his John Hancock — especially when there’s company money attached to it.

So Don called Lane into his office and demanded an explanation. After stumbling through the expected stages of denial and anger, Lane finally arrived at acceptance and even shame, admitting that, yes, he had forged the signature and even asserting that the money was rightfully his, all along. Although Don clearly felt some sadness and even pity for Lane’s dismal fiscal circumstances (“Why didn’t you just ask?”), there was little to be done. A trust had been broken.

Don simply advised Lane to go home, get rest, and “think of an elegant exit.” Without a work visa, Lane’s adventure in America, the land of hopes and dreams, had reached its humiliating end.

He couldn’t even bring himself to tell his wife of his misdeed and punishment. After all, she was too busy applauding him for having been appointed the head of the Fiscal Control Committee for The American Association of Advertising Agencies (affectionally called “The Four As”). Yes, Lane’s final day at SCDP was one of great highs and crushing lows.

After a failed attempt to kill himself by inhaling the exhaust fumes of his sleek new Jaguar (a defunct celebratory gift from his wife, paid for with money she didn’t know they didn’t have), Lane ultimately settled for hanging himself on the door of his SCDP office — a grim surprise for the office “mates” who so infrequently took note of him. As was requested, he even left behind a note of resignation.

Lane’s co-workers (and we) are unlikely to forget him now. And given that Don’s already carrying the weight of one suicide he unintentionally instigated (that of his half-brother, Adam Whitman), Mr. Pryce’s calculated and inelegant exit no doubt came as a particularly harsh blow to Mad Men‘s frequently unflappable protagonist.

(It’s a credit to the writers of this series, by the way, that Adam Whitman is mentioned a total of zero times in “Commissions and Fees.” A nice demonstration of how showrunner and his team of writers trust their audience to connect A to B without beating anybody over the head.)

In ways both professional and personal, Lane’s departure from the series marks another seismic loss for Don Draper and company, amidst a season that has already seen an awful lot of change. What will this firm — or this series — be with Peggy, Lane and Betty all having exited Mad Men‘s center stage?

It’s probably worth noting here that, although it dominated the impact of the episode, Lane’s suicide occurred in the final act of “Commissions and Fees,” an installment that otherwise found Don Draper continuing to draw upon the sense of reinvigoration he displayed in “Christmas Waltz” and “The Other Woman.” Prior to firing Lane and then finding the man’s corpse at the office, our boy Don was doing pretty well for himself. He seemed, finally, to care about his work again.

This week, Don met with Ken Cosgrove’s father-in-law, Ed Baxter, in an attempt to ensure that Ed’s company, Dow Chemical, would retain SCDP as its agency of choice. Ed wasn’t willing to commit — there were other, more reputable, offers on the table — but Don laid out a pitch that was almost combative in its intensity and was indicative of his voracious hunger for business and esteem: “You don’t want most of it, you want all of it. And I won’t stop until you get all of it.”

What, exactly, has sparked Don’s rebirth as ad man kingpin in these late episodes of the season? Mad Men has never been a series of easy, one-to-one correlations. What event or series of events marks change in any of us?

Perhaps the catalyst for Don’s transformation back to the man he used to be is sheer resistance to the change that has been happening all around him. His young wife, Megan, refuses to sit at home and be docile — she’s out on the stages and in the audition rooms of New York City, making a run at her dream, and not at Don’s. Joan has earned a full partnership in the firm by selling her body — an agreement Don was too late to prevent.

Peggy — the woman Don guided toward brilliance and then overlooked in her prime — has left him for a firm that offers more money, more challenges, and more respect. And Lane — the man who dared to steal scraps from the table of man who seemingly has it all — is now dead.

In times of crises, we each tend to return to what we know best. Don Draper knows how pitch. He knows how to sell. And as he told Lane shortly before the suicide that would rock SCDP, he’s started over many times before. But I’m not sure he’s never been this deep in the hole. The stage is set for what should be a very engaging season finale.