Charlie Sheen can rant and rave till he’s blue in the face, but the folks at the Staples Center stand staunchly by their policies. Find out what went down at the Stanley Cup game, and just what the notorious drug bath salts has to do with it all! 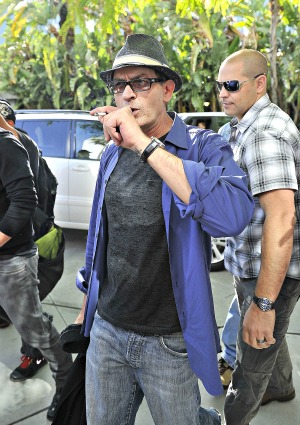 Charlie Sheen’s rant is documented for all to hear, thanks to a bevy of cameras filming the actor losing his cool Wednesday night outside of the Staples Center. Put earmuffs on the little ones and take a gander at the cursing blue-streak let out by the actor!

All was well at the Stanley Cup game until Charlie Sheen stepped outside for a smoke. “Out” being the operative word there — exiting the building and therefore forfeiting his chance to watch the rest of the game. Either Charlie Sheen was not aware of the Staples Center’s no re-entry policy, or he expected to receive special treatment.

The curse-land Charlie Sheen rant burst out when a female security guard upheld the facility’s policy.

Speaking to others watching it all go down, Charlie Sheen continued, “Have common sense and common courtesy gone in society? That was what I was trying to impress upon her.”

Making the situation worse were fans heckling the actor. TMZ reports one fans shouted to Charlie Sheen, “You ever done bath salts?” He shot back, “Would you ask me that at a f****** dinner party you moron … go f*** yourself.”

Another witnessing Charlie Sheen’s rant shouted, “Charlie, f*** all the hos tonight.” His sense of humor apparently not entirely gone, the Anger Management star replied, “I thought your mother and sister weren’t available.”

Though Charlie Sheen’s free use of expletives may set him apart from fellow celebrities, he isn’t the only one having issues getting into sports arenas. Less than a week ago Lil Wayne whined about not being let into an NBA game, despite not having a ticket.

“Was going to go to the Thunder game tonight but was denied by the team to be in their arena,” the rapper tweeted. “Wow. Smh. Go Spurs!”

Officials for the Staples Center explained Thursday their policy is designed for the “safety of fans,” and without anything resembling an apology to Charlie Sheen added, “We regret that any patron would direct such abusive language at one of our employees.”

Was the Staples Center right to deny re-entry despite Charlie Sheen’s rant?