Is it illegal to steal your own sperm? The couple in the new comedy adventure The Babymakers doesn’t think so. Especially, when it’s the only thing preventing them from finally getting pregnant. 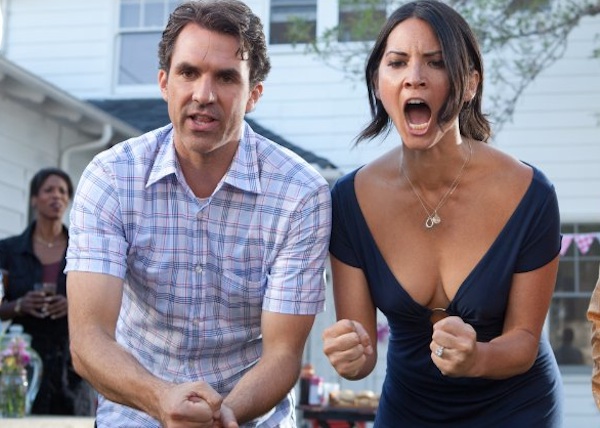 In the new romantic comedy with a side of adventure, The Babymakers, one couple decides to take their fertility into their own hands.

Your sperm are drunk…

After years of putting off having kids, Tommy, played by Paul Schneider of Lars and the Real Girl and Water for Elephants, decides it’s time to pull the plug. He’s finally ready to get his wife Audrey, played by Olivia Munn of I Don’t Know How She Does It and the TV show Perfect Couples, pregnant.

Movie review: Sarah Jessica Parker is the (un)perfect mom in I Don’t Know How She Does It >>

But after trying… and trying… and trying, it seems Tommy is falling short in the sperm department. They go to the doctor and soon discover that Tommy’s sperm count is beyond low. That’s when our fearless hero has to take matters into his own hands.

I’m not robbing a sperm bank…

Oh yes, you are. Having (fortunately) left a deposit in a sperm bank years ago, Tommy now has one more shot (literally) to get his manhood back. He decides, after much trepidation, that he must steal his last bag of sperm (do they come in bags?) from the bank, and the couple who has already paid for it.

SheKnows parenting: 5 Things to know when you’re trying to get pregnant >>

In order to do this, Tommy must round up his best buddies to help him crack into the bank and steal the baby juice before the other couple gets it. Can he do it in time…? We hope so. At least, there doesn’t seem to be any other way to stop the madness in this movie.

Expect a lot of R-rated gags in this tongue-and-cheek look at fertility from Jay Chandrasekhar the director of Super Troopers, Beerfest and The Dukes of Hazzard. The Babymakers releases into theaters this summer.