In Flight, Oscar-winner Denzel Washington plays a wounded pilot who heroically saves a flight filled with passengers when his plane malfunctions. But did he cause the accident? Watch the new trailer and judge for yourself. 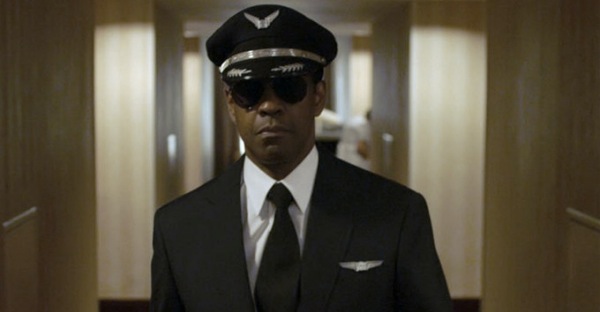 The last time director Robert Zemeckis put an Oscar-winning actor aboard an ill-fated plane, audiences were treated to a masterful performance from Tom Hanks in the isolated but brilliant Cast Away.

Will Denzel Washington fare any better now that he’s taking Flight with Zemeckis?

Flight marks visionary director Zemeckis’ first film since 2009’s A Christmas Carol, the motion capture holiday experiment with Jim Carrey in multiple roles. This looks more focused, with Washington playing a pilot who straps in for a routine flight, manages the take off and… well, things don’t go as planned.

Here’s the first official trailer. Watch for yourself:

Obviously, Washington’s heroics in the cockpit of a damaged plane automatically call to mind Capt. Sullenberger and the “Miracle on the Hudson” from a few years back.

But Flight holds an ace up its sleeve, a plot twist that literally turns the story upside down. Was Washington’s character drunk at the time of the flight? And did the alcohol in his system possibly cause the accident that he heroically prevented?

Washington’s gut-wrenching performance alone is reason to check out Flight — Zemeckis’ first live-action feature film since he stranded Hanks on that island in Cast Away.

But then you add the thrilling aerial scenes showcased in the trailer, and you surround Washington with jaw-dropping talent like Don Cheadle and John Goodman? Yeah, we’re lining up to grab a ticket right now.

Flight won’t be in theaters until Nov. 2. But what do you think of the first trailer? Popcorn thriller? Or Oscar contender? Let us know your thoughts.