Jessica Simpson’s weight isn’t going to lose itself! The new Weight Watchers spokeswoman was spotted leaving her trainer’s house without baby Maxwell Drew. Will she stick with the program? 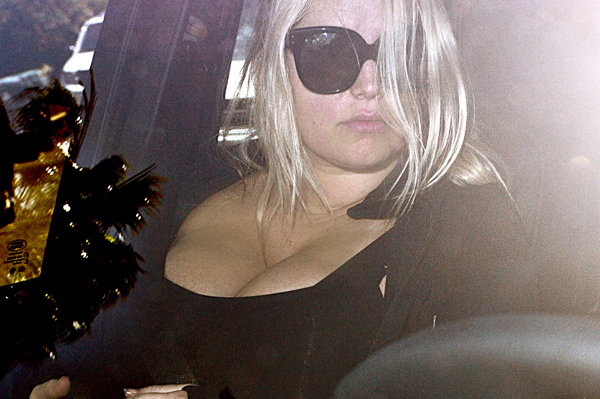 Apparently $4 million dollars has a way of motivating someone to lose weight. New Weight Watchers spokeswoman Jessica Simpson was spotted leaving a private gym on Thursday, signaling that she’s already worried about her weight loss obligations.

The singer, 31, confirmed last week that she’s working with the weight loss organization, though she didn’t comment on how she planned to do it. She told People that the main focus was health and everything else is a bonus.

“I think anybody who’s gone through a pregnancy, after they have the baby, it’s like, ‘I need to do something about this,'” she said of losing weight. “For me, I really want to do something that is a lifestyle, because in the past, I’ve been known to yo-yo diet.”

The singer’s slim-down plan reportedly consists of lots of gym time and no fast food.

“As soon as Jessica heals from the C-section, she is extremely determined to get back in the gym and work out,” a source told US Weekly. “She wants to show the world and is excited to do it.”

And while junk food might fit in her Weight Watcher’s Points Plus diet, it’s not exactly nutritious.

“She’s breast-feeding Max and wants her to get the best nutrition,” a source told that magazine, adding that the Texas native loves Pop-Tarts and Kraft mac ‘n’ cheese. “She has to cut down on fast food. Besides, it’s a great way to jump-start the massive diet ahead.”

We’ll admit we’re worried that she’s already trying to get back into shape — she only gave birth a few weeks ago. Still, Simpson seems committed to doing it the right way.

“The cool thing about [Weight Watchers] is that it focuses on healthy habits for the long-term (and I can still indulge in my guilty pleasures every now and then, too),” she wrote on her Facebook page. “I have actually gotten a group of friends together who are going to be doing it with me.”

Do you think Jessica Simpson can care for her first child and lose weight without resorting to dangerous methods?