Willie Nelson’s “Roll Me Up and Smoke Me When I Die” is being touted as the highlight (pun intended) of the 2012 CMT Music Awards. Watch the so-called “marijuana song” being performed live! 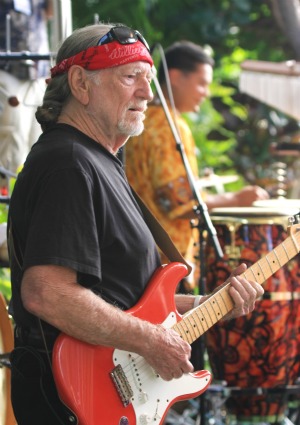 Willie Nelson’s 2012 CMT Music Awards performance is a must-see for fans, fellow musicians and marijuana enthusiasts alike. After performing what has been dubbed the “marijuana song” on stage at Wednesday night’s ceremony, Willie Nelson is being described as having “lit up” the stage.

Fellow musicians who joined in singing “Roll Me Up and Smoke Me When I Die” (the official name of the hot track off Willie Nelson‘s Heroes album) included Toby Keith, the Zac Brown Band, James Johnson and Darius Rucker.

A sampling of lyrics from Willie Nelson’s marijuana song include:

You won’t see no sad and teary eyes
When I get my wings and it’s my time to fly
Just call my friends and tell them
There’s a party, come on by
And just roll me up and smoke me when I die.

“It’s so Willie,” fellow musician Darius Rucker commented of “Roll Me Up and Smoke Me When I Die” at the 2012 CMT Awards. “It’s just get up there, play it live and have people dance along to it. It’s really what Willie does best. His voice sounds so cool on it. It’s just one of those Willie songs that’s just undeniable.”

When asked how he manages to write songs that strike a sweet note with the population at large, Willie Nelson explained, “If I knew the answer to that I’d be a trillionaire. You’ve got to be lucky and trust your instincts and judgment. And I’ve found that people all over the world are not that much different in the things they like and in the things they laugh and cry about. And if it makes me happy, there’s a good chance that someone else is going to like it.”