How many of you saw Kelsey Grammer was trending and thought the 57-year-old actor was getting married (or divorced) again? Well, if you thought that, you’d be half right. Grammer renewed vows with pregnant wife Kayte Walsh amid reports that he’s suffering a midlife crisis. You think? 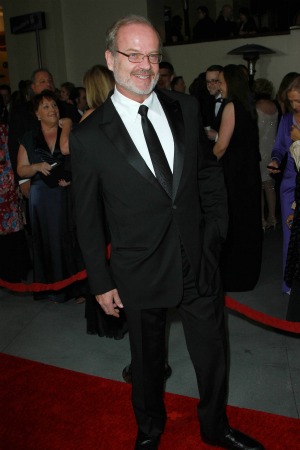 Kelsey Grammer’s vow renewal ceremony in Vegas comes a little more than a year since he tied the knot with wife No. 4 Kayte Walsh.

Apparently, the ceremony can be just as beautiful the fifth time around. Us Weekly reports a source with the Little Drive-Thru, erm, Church of the West said, “It was emotional… he was choked up about the whole time and you can tell they are very much in love and happy.”

News of the weekend ceremony also comes amid some nasty reports of Grammer’s alleged a-little-past-midlife crisis.

A source close to the Frasier star told Perez Hilton: “He has married a woman who is 25 years younger than him, he recently got his first tattoo, of her name, he decides to renew his wedding vows after being married for little over a year? This behavior is far away from the Kelsey that I have known for years, it’s like he’s reliving his youth.”

The source was kind enough to point out to us that he’ll be a pensioner around the time his twins are born. Said source surmises (don’t know how serious he/she is about this) he’ll be getting a mohawk or his ears pierced.

Somewhere Camille Grammer (wife No. 3, for those of you keeping score) is cackling…