Jamie Foxx is a man on a mission. The actor, alongside Christoph Waltz, is kicking butt and taking names in the teaser trailer for Django Unchained. It’s the highly anticipated slave-era drama from director Quentin Tarantino. 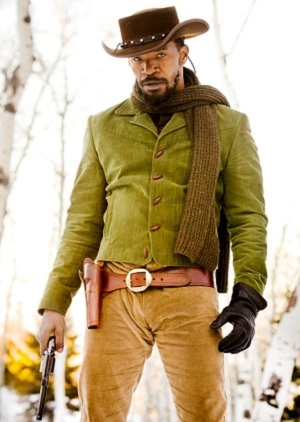 Quentin Tarantino is returning to the big screen with the western, Django Unchained. The title character is played by Academy Award-winner Jamie Foxx, and he’s surrounded by several familiar faces.

Last month, we gave you a sneak peek at Django and now you can see him and the rest of the cast in action. Similar to Kill Bill, Jackie Brown, Grindhouse and Pulp Fiction, Django Unchained has a ’70s feel. Just listen to the trailer music!

Django Unchained centers on a freed slave who joins forces with a German-born bounty hunter called Dr. King Schultz (Christoph Waltz). Schultz needs Django to help find the dangerous Brittle brothers, and in turn, he’ll lead Django to his wife Broomhilda (Kerry Washington), whom he lost in the slave trade.

Their journey for Broomhilda leads them to a plantation owner named Calvin Candie (Leonardo DiCaprio). Once Django and Schultz encounter Candie, they attempt to infiltrate his estate.

According to the official synopsis, the pair explore the compound under false pretenses and “arouse the suspicion of Stephen (Academy Award®-nominee Samuel L. Jackson), Candie’s trusted house slave. Their moves are marked, and a treacherous organization closes in on them. If Django and Schultz are to escape with Broomhilda, they must choose between independence and solidarity, between sacrifice and survival…”

Check out the teaser trailer for Django Unchained below:

What do you think of the first trailer for Django Unchained?