Donald Trump is still waiting for (ex-) Miss Pennsylvania to apologize. Hours after the tycoon and head of the Miss Universe Organization threatened to sue Sheena Monnin for what he claims are “false” accusations that the Miss USA pageant is “rigged,” he gave the beauty queen another chance. The alternative to a suit? Send a written apology and retract the claim (of course)… stat! 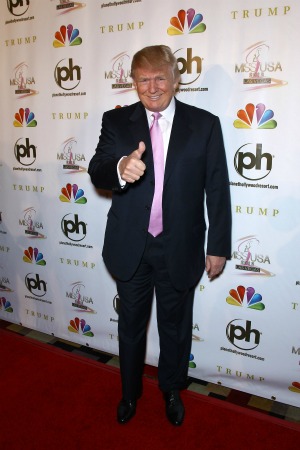 Sheena Monnin still has time to avoid a lawsuit, according to stipulations made public by Donald Trump’s counsel yesterday.

Special counsel Michael D. Cohen told E! News that “If Ms. Monnin in a writing received by Mr. Trump within the next 24 hours apologizes and withdraws her utterly baseless claim that the Miss USA pageant results were predetermined, then and only then will Mr. Trump and the Miss USA Organization not proceed with litigation against Mr. Monnin seeking massive damages for her defamatory and offensive remarks.”

Whew! Got to love legalese, right?

Trump had vowed to slap the 27-year-old with a suit following her claims on Facebook that a fellow contestant knew the names of the finalists for Sunday night’s Miss USA contest before the show aired.

Pageant officials have said the contestant she “sourced” has denied Monnin’s allegations.

Organizers themselves have planted the seed in the public’s mind that Monnin, who resigned her post, was upset with the Miss Universe Organization’s decision to allow transgender Miss Canada Jenna Talackova to compete in the beauty contest.

They provided E! with statements from her resignation notice, and report that Monnin called the organization that oversees the Miss USA pageant “fraudulent, lacking in morals, inconsistent and in many ways trashy.”

Trump has distanced himself from the transgender part of the controversy. He instead claims that Monnin’s just a run-of-the-mill sore loser.

Of course, not everyone is siding with Trump. A columnist for home state newspaper, Philadelphia Daily News, insinuates that the Miss Universe Organization may have wanted this controversy all along — in a repeat performance of Carrie Prejean’s scandalous remarks about gay marriage.