Charlie Sheen may no longer claim to have tiger blood, but he’s certainly back to giving jaw-dropping interviews! Not only has the actor unabashedly fallen of the sobriety wagon (vodka, straight-up), but he’s plotting to get ex-wife Denise Richards back into bed. 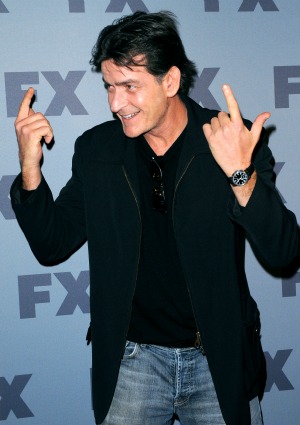 When Charlie Sheen gives a Rolling Stone interview the public listens in. As has come to be expected from the often erratic star, it’s no-holds barred — from talk of foot fetishes and sobriety lost, to freely admitting he’s trying to sleep with Denise Richards again.

Charlie Sheen on falling off the wagon: “I mean, the sh*t works. Sorry, but it works. Anyway, I don’t see what’s wrong with a few drinks. What’s your drink? Tequila? Mine’s vodka. Straight, because I’ve always said that ice is for injuries, ha ha.”

Details of Charlie Sheen’s foot fetish: “I’ve not dated girls because of their feet, just the length of certain toes and the shape of where things should be and they’re not. Hammertoes are bad. And the second toe being too long? That’s bad, too.”

Denise Richards on her relationship with ex-husband Charlie Sheen: “He and I are like best friends now. Confidants. He tells me everything. And we sleep in separate rooms. Everybody’s going to want to know that, too.”

Charlie Sheen on getting Denise Richards back into bed: “She still looks f***ing great. Do I want to? Yeah! Does she? Don’t know.”

Check out a clip of the actor during his photo shoot below — but consider this a fair warning of not only a bit of bad language, but shots of a few scantily clad women contained within!

What do you find most shocking about Charlie Sheen’s Rolling Stone interview?