Tonight’s the night! The 2012 CMT Music Awards — hosted by Kristen Bell and Toby Keith — is slated to start at 8 p.m. EST. We’re pumped for the awards, but we’re more excited to see what the stars wear on the red carpet. We’ll have all the hot couture action as it happens — right here!

To say Kristen Bell is excited to host the 2012 CMT Music Awards with Toby Keith is an understatement. The adorable actress has the same sort of enthusiasm about her hosting gig as she did about her birthday sloth — without the tears, of course.

“They just invited me and I squealed, ‘Yeah!’ and obviously said yes. I had never been to Nashville before, so I was very excited,” Bell told reporters last week. “I’m a country music fan.”

Her co-host was more low-key about his hosting gig. The “Red Solo Cup” can’t risk his party bro rep by getting excited, after all.

“I hosted it several years ago with Pam Anderson and I guess I was back on the cycle again. So I’m back here again. It’s always an honor,” Keith said to reporters. He softened a little bit when talking to Country Weekly, adding that he’s a fan of the actress. 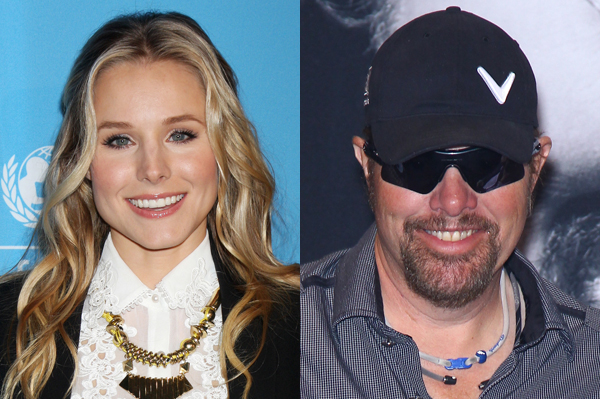 “I was a big Deadwood fan,” he told the magazine of Bell’s former HBO show. “My buddy (actor) W. Earl Brown played a big role and Kristen was in that with him.”

Well, we’re excited: Where else can we see all of our fave country stars in one place? To be honest, we’re just excited to see what sort of outfits singers such as Carrie Underwood, Sara Evans, Miranda Lambert, Martina McBride, Kellie Pickler and LeAnn Rimes wear to the show. Why? Well, we love to get judgy over outfits. It’s a girl thing.

Luckily, we won’t have to wait until the awards show starts at 8 p.m. EST to see the outfits. SheKnows will have the 2012 CMT Music Awards red carpet live right here, starting at 6:30 p.m. EST.

We don’t yet know what Bell will wear, but she’ll be comfortable on stage, thanks to her co-host.

I hear he is very tall,” she added to Country Weekly, “which will probably make me feel really comfortable because (fiancé) Dax Shepard is tall, too.”