Who doesn’t have fond memories of summer reading programs, afternoons spent curled up with a book? To aid you and your children in selecting books this summer, Jenn Lawrence has compiled a list of must-read summer books for children of all ages! The Fantastic Flying Books of Mr. Morris Lessmore
by William Joyce
Ages 4 & Up

Morris Lessmore loves books. He has quite the book collection, one to which he has devoted his entire life. One day a horrible wind storm destroys this collection, and Morris is heartbroken. Thankfully, after the storm, he comes across an abandoned library full of books! These aren’t your typical books though! Their covers flap like wings, and they read themselves to him each night. The books take care of him as he ages, nurture and protect him as he starts writing again. A truly rewarding story not just about books, but the power of books and their lasting resilience. Dragons love tacos. Tacos of all varieties — chicken, beef, big tacos, small tacos. The only tacos dragons don’t like are spicy tacos. When a young boy has a party for dragons, he’s certain to serve tacos. Yet, unintentionally, he serves the tacos with salsa that he believes is mild, but instead has a kick of jalapenos inside. The result — fire breathing dragons! An adorable, hilarious book filled with beautiful watercolor drawings, this book will be a hit for any fans of dragons (and tacos). 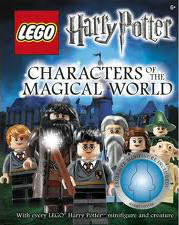 Lego Harry Potter: Characters of the Magical World
Ages 6 & Up

Explore the magical characters of Harry Potter! While viewing richly-detailed pages on each of the characters in the Harry Potter series, learn unique trivia about the series. Includes an exclusive mini-figure! A must-have for any Harry Potter or Lego fan!

Seraphina
by Rachel Hartman
Ages 12 & Up 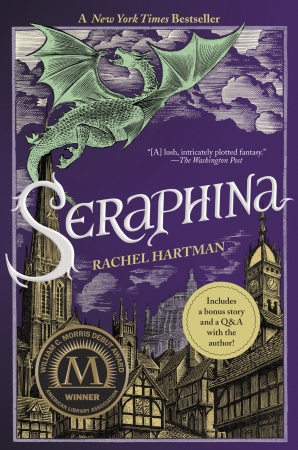 Despite a 40-year-old treaty of peace between dragons and humans, the tension continues to run high. Allowed to join the court, dragons are an asset using their mathematical minds to serve as ambassadors to universities. As the anniversary of the treaty looms, tensions are at an all-time high. Seraphina Dombegh is a gifted musician who just recently joined the court. Shortly thereafter, a member of the royal family is killed, and the cause leads authorities to believe the murder was committed by a dragon. Seraphina is asked to join the investigation but is worried that her own secret, the secret behind her magical gift, will come to light. The unveiling of this secret would put her very life in danger. A beautifully-written fantasy debut about a young girl’s journey to gain acceptance of herself.

For Darkness Shows the Stars
by Diana Peterfreund
Ages 13 & Up

In this thrilling sequel to Rampant, it has been four years since Kai left. In that time, a great deal has changed and Elliot is forced to work harder to hold on to her family’s estate. To do so, she begins renting her land to a group of shipbuilders referred to as the Cloud Fleet. Included in this group is a renowned explorer, Captain Malakai Wentforth, who turns out to be none other than Kai himself. Elliot believes this is a chance to rekindle her romance with Kai, but he has other things on his mind. He’s holding onto a secret, one so powerful that he holds the fate of their society in his hands. Inspired by Jane Austen’s Persuasion, For Darkness Shows the Stars is a beautifully written novel, full of rich characters, romance, betrayal and redemption.

Shadow and Bone
by Leigh Bardugo
Ages 12 & Up

The once powerful nation of Ravka has been taken over by the Shadow Fold, an indestructible darkness filled with monsters that feed on human flesh. While Alina Starkov’s regiment is attacking the Fold, her best friend is injured. She reveals a power that saves him, one that could also save her war-torn home. Forced to leave everything she knows behind, Alina is taken to the royal court to be trained as a magical Grisha. The entire kingdom is relying upon Alina’s magical powers. A truly unremarkable girl in every sense of the word, Alina is forced to look within her own heart to gain the strength to do what it takes to save her homeland. Fans of the Harry Potter series as well as viewers of the Avatar: The Last Airbender cartoon series will find elements that are familiar, making this book one that will be enjoyed by readers of all varieties! A truly unique and impressive novel, the first book in a trilogy.

Fourteen children living in Monument, Colorado, are on a bus that crashes into a superstore in the middle of an enormous hailstorm. Their driver, promising to seek help, leaves but never returns. This is just the beginning of the tragedy that befalls the children and the entire country as a whole. Massive earthquakes and chemical weapons spills soon cause the country to fall to its knees. The 14 children are forced to survive on their own, building a sort of refuge in the chain supercenter they now call home. Each of the children, ranging in age from elementary school to high school, are richly developed. Narrated by Dean, one of the young victims, the story he portrays is stark and realistic. While focused toward both genders,  this novel is so full of action and intensity it is guaranteed to entice even the most reluctant of male readers.