20-year-old Scout Willis was arrested Monday night in New York City after police found her drinking in public and flashing a fake ID. 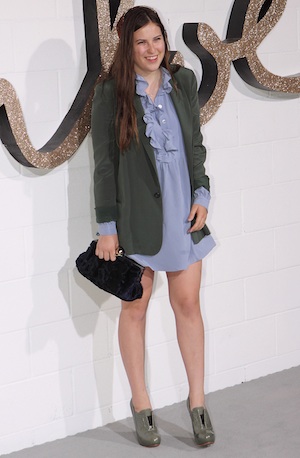 Scout Willis now faces charges of underage drinking after the 20-year-old daughter of Bruce Willis and Demi Moore pulled a stunt on Monday night that landed her in handcuffs. The Los Angeles Times reports Willis was arrested Monday night at Union Station in New York City after police found her drinking a “Pakistani beer” in public. When questioned, Scout Willis tested her luck and presented the police with a driver’s license with the name “Katherine Kelly.”

Police didn’t buy it and Willis eventually gave her real California identification. People magazine reports Willis confessed after being questioned. “The first ID isn’t mine. My friend gave it to me. I don’t know Katherine Kelly,” she said. Her attorney commented on the arrest: “Scout Willis did the right thing. She was honest about who she was. She is a very proper, very impressive, smart young woman.”

We’re not sure drinking in public when you are underage is an “impressive” decision but it looks like Scout will likely just face a fine and possibly probation. Willis — who is a student at Brown University in Rhode Island — faces just two misdemeanor charges and returns to court on July 31, 2012.