Former L.A. Dodgers manager Tommy Lasorda is recovering after a minor heart attack earlier this week. Read on to find out his prognosis. 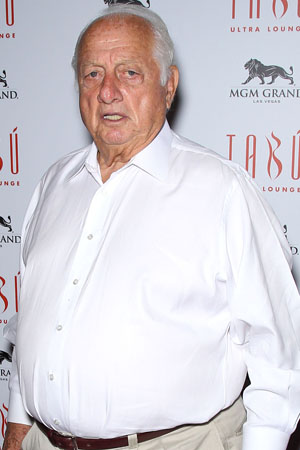 Hall of Fame Los Angeles Dodgers manager Tommy Lasorda is recovering in a New York hospital after suffering a minor heart attack on Monday, his team confirmed on Tuesday afternoon. He’s expected to be released from the hospital on Wednesday.

Lasorda, 84, is synonymous with the Los Angeles MLB team — he’s spent over 60 years involved with the team in various capacities, including manager. He’s currently the “Special Adviser to the Chairman” and works in the team’s front office.

He’s battled heart problems over the years and quit as active manager of the Dodgers after suffering a serious attack in 1996. Lasorda also famously pitched for Slim-Fast for several years, claiming that the “Ultra Slim-Fast plan” helped him drop “30 pounds in three months.” He’s most recently been the pitchman for a brand of “edible health strips,” whatever those are.

Lasorda’s age is showing these days, though — he fell asleep during a 2009 interview. Still, he’s a wealth of baseball knowledge that fans old and young look to as part of the history of the game. Don’t realize just how long he’s been involved in the game of baseball? He barely earned any money as a starting player.

“I signed a contract… for $225 a month. I just wanted to play baseball so I was happy,” he told American Sportscasters Online in an interview a few years ago. Still, he considers himself pretty ordinary.

” I’ve lived in the same house for over 40 years. I drive the same type of cars. I dress the same way. But some how I’ve got six honorary doctorate degrees. I’ve got the Tommy Lasorda Heart Institute. I have an asteroid named after me,” he told the website in the same interview. “I’ve dined with presidents. I spoke at the Nixon Library, the Reagan Library and I just spoke a couple of weeks ago at President Bush’s Library in Texas. I’ve spoken nine times to the Air Force Academy, twice to West Point, twice to Annapolis and at practically every Air Force base in the country and outside the country.”

Doesn’t sound very ordinary to us, Tommy. Best wishes for a full recovery!