Gwyneth Paltrow thought she was being cool by tweeting about her time onstage at the Kanye West and Jay-Z concert in Paris over the weekend. So, why do we think it was annoying? 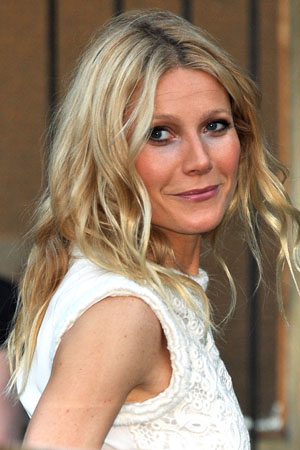 Gwyneth Paltrow’s annoying factor went up by about a thousand points when she tweeted from the stage at Jay-Z’s and Kanye West’s concert in Paris over the weekend.

“Ni**as in paris for real @mrteriusnash (the dream) tyty, beehigh,” she wrote on her WhoSay page, referring to the Jay-Z and West song by the same name. Some fans think a rich white woman shouldn’t be using the word, even if it’s part of a song title and censored.

“You’re almost a 40-y/o white woman, c’mon you should know better,” one person commented on the tweet and accompanying photo.

No, Paltrow really didn’t think her post through, though it seems like she’s pretty naïve as to why it’s not kosher to write about something like that as an almost “40-y/o white woman.” Still, she’s done plenty of other things that are just as annoying — if not more so.

Need proof? Remember that $425 cleanse she promoted earlier this year? The Country Strong actress wrote in her GOOP newsletter that she planned to lose that excess holiday weight with the help of Dr. Alejandro Junger’s shakes, supplements and starvation diet.

“I’ve used Clean in the past with great results, losing a few pounds and kick-starting a healthier and more energetic New Year,” she wrote about the cleanse, totally not realizing most of her followers don’t have $425 to spend on some worthless crash diet. “This month, I’ll be doing it along with members of the team and we hope you will too. And, it goes without saying, but be sure to check with your doctor before getting started!”

Oh, and then there was that time she gave suggestions for a new spring wardrobe. The cost for her recommendations? A cool $20,000.

“Because you asked for it, in the coming weeks and months we’ll be featuring more fashion, with investment pieces like the ones below, and the best steals available for you to snap up,” she wrote in the newsletter. “The idea is to mix and match high and low with your own personal style.”

See what we mean? We could add more examples, but then it would just seem like we’re picking on her.

Do you think Gwyneth Paltrow was out of line for her tweet?