The law is on Halle Berry’s side in her custody case against Gabriel Aubry. Find out the latest development — and why she’ll likely get her wish to move to Paris with future husband Olivier Martinez. 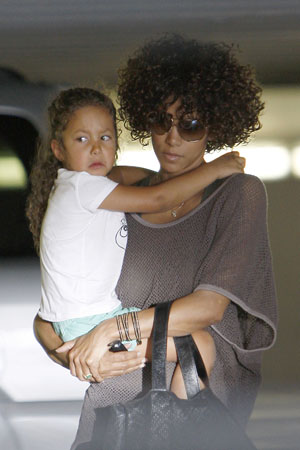 It looks like Halle Berry will be moving to Paris with daughter Nahla after all: The psychologist assigned by the court in her custody case against Gabriel Aubry declared that the Oscar-winning actress is the better parent, according to TMZ.

The psychologist added in her report that she doesn’t question Aubry’s love for his daughter, but she’s concerned that he doesn’t have the correct capacity to care for the adorable 4-year-old.

The declaration means that Berry has the advantage when it comes to arguing for the move in court. Aubry will likely get visitation, but the nearly 6,000 miles between Los Angeles and Paris will make it difficult to see his daughter that often.

The psychologist’s decision is just another development in what’s been a down and dirty court fight. The pair — once in serious love — has fought over their daughter’s custody for nearly a year. It all started when Aubry allegedly pushed the girl’s nanny — Berry then tried to get all of his rights taken away, saying he’s not a fit parent.

Fit parent or not, the future wife of Olivier Martinez has had the advantage in the case, thanks to her mountains of cash and ball-busting lawyer, Stephen Kolodny. A source close to Aubry said he’s not scared of the lawyer, but it’s not looking so good for him.

“Gabe’s attending his court-ordered anger management sessions and parenting classes,” the source told RadarOnline earlier this year. “He isn’t a bad guy, he is trying to be the best dad possible to Nahla. He feels that Nahla is the collateral damage in all of this, and that breaks his heart.”

Just another example of how breaking up is (especially) hard to do when you have kidlets. Yikes.