Elton John is so freaked out by “frail” Lady Gaga that he called up her mother to tattle on the singer’s hard-working, scarcely eating habits — yet it’s he who was recently hospitalized. 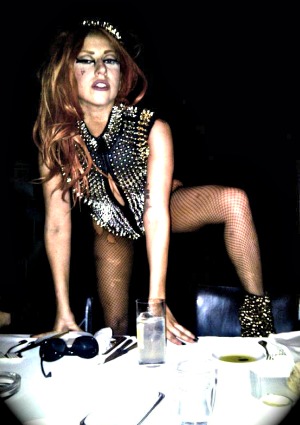 Elton John may be trying to look out for young star Lady Gaga, but it seems his attention to health may be misplaced. The veteran singer has admitted to being so worried over Lady Gaga‘s eating habits that he’s called up her parents to vent.

“I look at Gaga and I think, ‘How does she do it?’ I talk to her mom and dad about it,” Elton John explained during a recent interview with The Guardian. “They worry.”

Lady Gaga is a hypocrite, and human too >>

“She is frail, and she doesn’t eat when she should, and she’s a girl, and it’s tougher for a girl,” the music legend went on to say, adding a bit of sexism into the conversation. “She works really hard. She will be in Denmark one night and Saudi Arabia the next. I know how tiny she is and I do worry about her, yes.”

Despite his best intentions towards taking care of the 26-year-old worldwide star, it’s Elton John’s health that has been actually requiring attention as of late. The 65-year-old, who reportedly plays 120 shows a year and is father to 1-year-old son Zachary, was hospitalized in late May (just a few days after dishing the Gaga scoop) with a respiratory infection.

How does he do it all? Elton John explained, “I know when I come offstage, I’m going to be happy. I can go to bed. I don’t have to stay up all night doing drugs. I’m going to get up in the morning and see my little boy and see my partner. We have a life. You think, ‘How the f**k do you do it?’, but actually, you do. You just manage to do it.”