To Russell Brand’s dismay, Katy Perry is keeping him in her biopic Part of Me and, perhaps for the British comedian anyway, revenge is a dish best served… snarky, at the MTV Movie Awards. 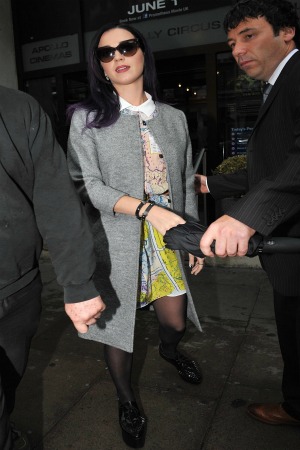 Russell Brand is reportedly less than pleased over ex-wife Katy Perry’s refusal to remove him from her documentary Part of Me.

The marriage may have lasted for 14 months, but the comedian was not short on jokes about his ex and their relationship during the show’s opening monologue.

As the host, Brand joked that “The last MTV awards show I hosted I ended up marrying someone who was there.”

Perry revealed that, during that 2009 event, she literally knocked Brand upside the head — hurling an empty water bottle at him from across Radio City Music Hall.

To this most recent awards show, Brand went on to say: “I will be keeping my eyes peeled tonight for my next wife” and later thanked Kim K. for “taking the pressure off” with the blink-and-you-miss-it 72-day marriage to Kris Humphries.

The Brit, who turned 37 yesterday, divorced 27-year-old Perry in December.

The Independent reports Brand originally wanted to screen the 3D movie before it debuts over the Fourth of July weekend.

The title of the flick may not reflect it, but Perry told Ellen DeGeneres she will be showing all of her life on the road — and that includes Brand and their whirlwind marriage.

Brand has expressed concern about “rants” filmed during his ex’s tour that may make it onto the big screen. The ranting already went public last month when the comic tore into a heckler who shouted his ex-wife’s name during a stand-up routine.

The recent jokes, as well as Brand’s apprehension, are uncharacteristic of the many nice things he has said about his ex since their split. In December, he went so far as to tell DeGeneres (what is up with the Ellen getting this couple to open up here?) that he “still loves” the starlet, calling her a “beautiful human being.”

Regardless of the alleged snub, if the production team is any indication, the movie is poised to get a lot of butts in seats. The film is produced by Paramount’s Insurge division — the brains behind the Beeb’s “Never Say Never,” which grossed $100 million worldwide.