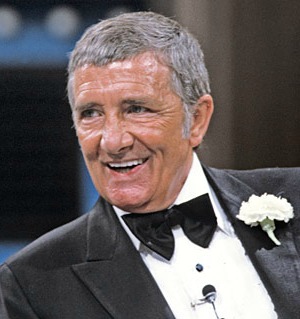 For anyone who watched game shows growing up, chances are Richard Dawson is one game show host that stands out in your mind.

It might be that he has kissed an estimated 20,000 women on his show Family Feud, which he hosted for a total of 16 years, or that he created a new style of game show hosting.

Saturday, Dawson succumbed to cancer at the age of 79.

“It is with a very heavy heart that I inform you that my father passed away this evening from complications due to esophageal cancer,” said Dawson’s son Gary, according to msnbc.com. “He was surrounded by his family. He was an amazing talent, a loving husband, a great dad, and a doting grandfather. He will be missed but always remembered.”

For five years in the 1970s, he also was a regular on the Match Game.

According to the LA Times, Dawson was told of his cancer diagnosis only three weeks before his death. His daughter, Shannon, told Access Hollywood that he had almost no symptoms before he received his diagnosis.

“He just thought he had heartburn and then he found out he had Stage 4 esophageal cancer,” she said.

Dawson was born in 1932 and received his first acting role at the age of 30. He married fellow British actress Diana Dors in 1959. The couple had two children but divorced in 1966. He married again in 1991, to Gretchen Johnson. The couple had one child.

While he became best known for Family Feud, Dawson’s first big role was on Hogan’s Heroes.

According to the Internet Movie Database, he played Cpl. Peter Newkirk from 1965 to 1971. After the show ended, he was in numerous movies and television shows before joining Family Feud in 1976.